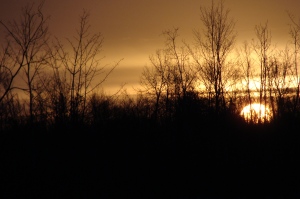 Sunrise over Polk County, WI, while in pursuit of hounders in state forest.

The second day of the hound hunt for wolves found us patrolling the far eastern portion of Zone 3, where it borders the state of Minnesota. This is also the area where we witnessed a lot of wolf trapping activity when the wolf hunting season first opened on October 15th. After filling up with gas and coffee at the town of Danbury, where hound hunters are known to converge, we headed north into public forest lands in the far northern portion of Burnett County. Leaving Highway 35, we saw an atypical hounding truck driving along the St. Croix River. We turned around and started following the truck, thinking that the small Geo Tracker had been modified to accommodate two hounding dogs. 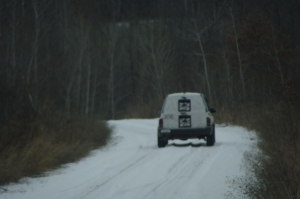 First active hounders spotted on county forest land on the morning of 12/02. Hounds currently occupying boxes in back of vehicle, awaiting a fresh scent.

We followed the truck as it turned off Markville Road and crossed the state line into Minnesota where hunting with hounds is illegal. We could see hounds in the back as they began to stop periodically to check for fresh wolf tracks. After approximately 30 minutes of hunting alone, the Geo Tracker met up with another truck with Minnesota license plates. While Minnesota’s wolf hunting season was also open, the use of hounds to hunt wolves is illegal in the state. 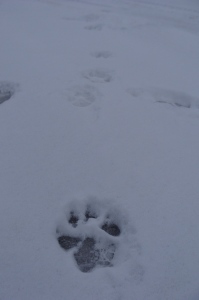 After talking for ten minutes, the two vehicles parted, the one Minnesota truck passing us and giving us quite a look. We continued following the Geo Tracker as they continued to look for tracks, while hunting remained relatively uneventful. Over the next hour, the Geo Tracker re-connected with the Minnesota truck a number of times until eventually turning around and pulling up to our driver’s side window, wanting to talk.

Both hunters asked how and what we were doing out there, and we told them we were driving around, enjoying the forest. They then interrupted to ask us directly if we were Wolf Patrol. We immediately answered yes, and both hunters looked at each other and chuckled. “Have you seen any wolves out here?” asked the driver. “I don’t know you tell me?” we responded.

They then asked if we were having any luck finding wolf hunters and it was then our turn to chuckle. After wishing each other a good morning, the hunters drove off. Shortly thereafter, we lost the hunters as they left Minnesota and re-entered Zone 3 in Wisconsin.

The next day, December 03, pictures surfaced on Facebook of the Geo Tracker hound hunters with a wolf they had killed south of Clear Lake in Zone 6, the only other zone remaining open to wolf hunting. “Did you guys run into those assholes who’ve been following around the WI wolf hunters all season at all?” read one of the comments on the Facebook post, while another read, “Shoot a wolf you get (sic) a free Wolf Patrol member tag as well. Don’t forget to fill that one too lol nice kill guys. Keep shooting!”

Hound truck seen rendezvousing with friendly vehicle in the Polk County forest at various points during our monitoring.