Great Lakes Wolf Patrol’s (GLWP) objective in its December 2014 wolf hunt monitoring campaign, was to document the use of hounds to hunt wolves and patrol for wolf hunting violations when Wisconsin’s hound hunting season began on the first of the month. Wisconsin is the only state to allow the hound hunting of wolves, with the 2014 hound hunt being the second in the state’s history, since the gray wolf lost federal endangered species protection in January 2012. The hound hunt lasted five days before the statewide quota of 150 was reached and Wisconsin’s wolf hunt closed.

On November 20th, GLWP met with Wisconsin Department of Natural Resources (DNR) wardens to discuss the upcoming hound hunt for wolves. Since our reporting of a trapping violation in October, DNR law enforcement officers expressed a willingness to outline the legality of wolf trapping and hound hunting of wolves, as well as answer questions so citizen monitoring activities can have a greater law enforcement, as well as fact-finding value. GLWP was informed by DNR wardens patrolling the wolf hunt where we monitored the wolf hunt in October, that there were no complaints related to our monitoring activities. DNR wardens also welcomed our illegal hunting and trapping reports to their anti-poaching hotline. GLWP informed DNR officials that in addition to patrolling for illegal wolf hunting in December, that our objective was the video documentation of the legal hound hunting of wolves.

Wolf Patrol’s intention is to establish a working knowledge of what hound hunting for wolves is, so that we as citizens might better understand it as a wildlife management tool and additionally understand the logistical complexities involved in enforcing hound hunting regulations and policing the hunt. It is hoped that our monitoring will neither confirm or refute claims, but simply present evidence that citizens could then use to educate themselves accurately. Any evidence obtained is free to be used by any individual or group.

During our November meeting with DNR officials, specific concern was expressed for the stage of hound hunting when a wolf is exhausted from pursuit by hounds. Hound hunting of bears, mountain lions or raccoons often ends with the pursued prey taking shelter in a tree. GLWP questioned DNR wardens about this stage of hound hunting for wolves, and were told that in such instances, the wolf could effectively protect itself. Mention was made of the many fatal conflicts between hunting hounds and wolves, but nothing was provided to assure us that hound hunters could control their hounds when far from their reach and in pursuit, or cornering a wolf.

Much of the time GLWP observed hound hunters in pursuit of wolves, their hounds were out of the reach of their control and often times, as is quite common, could not be easily located. Much is unknown about the hound hunting of wolves. Yet many speak of the potential for violent interactions between wolves and hunting hounds. Hence, the focus of our December monitoring of the hound hunt for wolves, was to determine whether hounds were indeed biting, attacking or killing wolves while free-roaming public lands in Zone 3 of the wolf hunt area. In the 2013 Wisconsin wolf hunt, 35 wolves were killed with the aid of dogs, all in Zone 3.

On 11/29/14, when GLWP began its patrols in Zone 3, the statewide wolf kill was 146 animals, with twenty-nine wolves reported killed in Zone 3 (with a total allowable quota of 40 wolves.) Wolf Patrol members began patrols, focusing our investigations on wolf hunting activities in the western portion of the zone, along the state border with Minnesota. The same areas where GLWP documented wolf trapping activities in October. 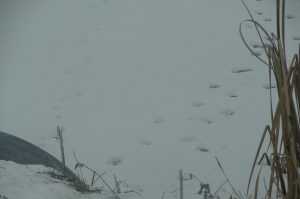 On 12/01/14, the hound hunt for wolves began with the statewide quota still at 146. The first two days saw sub-zero temperatures, which were not favorable for hunting hounds. Warmer temperatures beginning on 12/03/14 allowed for more favorable hound hunting conditions which resulted in two wolves being legally killed in Zone 3 during Wolf Patrol operations before the season ended on 12/05/14. Of the two wolves killed with the aid of dogs in Zone 3, only one was taken in the Polk County area where Wolf Patrol documented hound hunting for wolves.

Wolf Patrol monitored hound hunts on three separate occasions during the five-day hounding season, on December 2nd and 3rd, when we encountered two separate hound hunting parties in Polk and Burnett counties. On the morning of 12/02/14, patrol members documented wolf hunters operating near the northwestern border of Zone 3 and the state line of Minnesota, along the Burnett and Douglas county line. Two vehicles were involved in the hunt, one with Minnesota license plates. While no dogs were released during our observations, the search for wolf sign and tracks by the hunting vehicles took the hunters frequently across the state line into Minnesota, where a wolf hunting season in the state’s East-Central Zone was open. The monitored hunters were informed that they were being monitored by GLWP, and there were no further interactions during the short encounter when no wolves were pursued with hounds.

On 12/03/14, from approximately 830am-130pm, GLWP was patrolling the Polk County forest when we observed two trucks wolf hunting. These were the same two trucks encountered by a separate patrol the day before in the stage of hound hunting that constitutes driving slowly down county roads, checking for fresh wolf sign where hounds can capture enough of a scent to follow. No illegal hounding activity was observed on either day, and hound hunters did not violate the “six-pack” rule, which forbids hound hunters from using more than six hounds on the ground at any one time.

During the 12/03/14 monitoring, fresh wolf tracks and scat had been observed at locations where the hound hunters were stopping, so it was believed that wolves were or had been in the immediate area in the last 12 hours. Monitoring in the Polk County forest area was uneventful, with two patrol vehicles maintaining a buffer zone of 50 yards from the hound hunters when operating in the field. 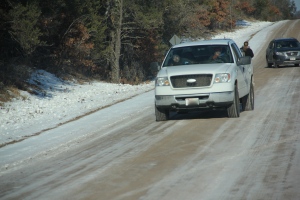 Three vehicles were being used in the hound hunt, two with hounds, the third being used to film us and retrieve stray hounds. Hounds were free-roaming in the forest area throughout the day, with some hounds being taken out on leads to search for wolf scent, while others remianed in their boxes. No wolves were killed during our monitoring of the hound hunt on 12/03/14. The monitoring ended after the hound hunters returned to Luck, Wisconsin where GLWP were questioned by Polk County Sheriff’s deputies after the hound hunters filed a harassment complaint. No charges were filed. On 12/04/14, the same hound hunters reportedly killed a 60 lb. female wolf in Zone 6, ending the season one wolf over quota, at 36 wolves killed in Zone 6, which covers two-thirds of southern Wisconsin.

While GLWP was unable to document any encounters between hounds and wolves, we were able to observe on three separate occasions, the hound hunting of wolves. None of the hounds observed in the wolf hunts appeared to be mistreated or malnourished, and handling procedures while loading and unloading the hounds was routinely humane. Hound/wolf interactions remain at their worst in the bear training season (July 1-September 30) where 18 hounds were killed by wolves this past summer alone, while bear hunters train their dogs in wolf rendezvous areas. 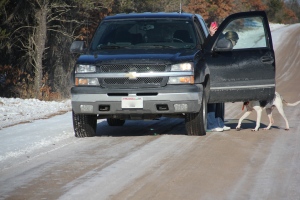 By 12/04/14, 3 wolves had been reported killed in Zone 6, bringing the total quota to 149, one wolf short of the statewide target of 150 wolves. GLWP believed that the warmer weather and upcoming weekend would mean an increased number of hound hunters effectively hunting, with a high probability of exceeding the statewide quota of 150 wolves, despite the reported kills in Zone 3 still being ten below the target harvest of 40 wolves. In the interest of observing the statewide quota of 150 wolves targeted for lethal control by sport hunters and trappers, GLWP decided to pressure DNR to close Zone 3 to wolf hunting on 12/04/14.

December 5th was the last day of Wisconsin’s 2014 wolf hunt, with a total reported wolf kill of 154 animals, four animals over the statewide quota. 123 of the reported wolf kills were trapped then shot, 22 were shot by hunters, 3 were killed by bowhunters and six with the aid of hunting dogs, 3 in Shawano County, one in St. Croix county (Zone 6), and one each in Price and Polk Counties (Zone 3).

While we observed no illegality or cruelty in the hound hunt for wolves, what we did document was a recreational hunt for wolves that involves an excessive degree of technology that in our opinion demonstrates unethical hunting and unfair chase. Primary to successful hound hunting is the use of vehicles in the pursuit of wolves. Hound hunters routinely hunt from their vehicles, something illegal in other big game hunting, and use cell phones to coordinate their hound hunting activities. This is not the only time satellite technology is used in wolf hunting with hounds.

A common component in hound hunting today is the use of GPS-equipped dog collars that allow hound hunters to follow their dogs remotely. While this is convenient for the hound hunters, what it also does is reduce the amount of time a hound hunter is physically monitoring his/her animals. This is identifiably the most controversial element of the hound hunt for wolves and one that GLWP believes needs to be monitored more adequately. All hounds observed used for wolf hunting in December wore Garmin GPS collars.

Great Lakes Wolf Patrol’s conclusion is that the hound hunting of wolves does not constitute a legitimate game management technique due to the high probability of unpreventable violent encounters between hunting hounds and wolves. It is inarguable, that the legal running of hounds in known wolf territory is leading to numerous death and injury to hunting hounds, and the use of hounds to hunt wolves only increases the liklehood of more violent encounters. There is also a recognizable enforcement problem when the hound hunting season for wolves closes, yet the hound hunting/training season for coyotes and other animals remains open, leaving it impossible to distinguish illegal hound hunting for wolves from legal hound hunting (or training) of coyotes. 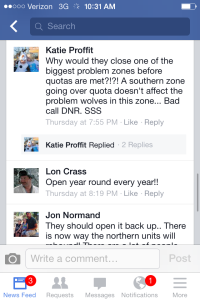 Mention must also be made to the blatant encouragement of illegal wolf hunting on social media sites such as Facebook’s “Wisconsin Wolf Hunting & Wisconsin Wolf Hunt” where frequent comments are posted encouraging Wisconsin residents to kill wolves out of season and “Shoot, shovel and shut-up.” or “SSS” which is a frequently spoken acronym on anti-wolf social media sites. Many of these statements originate from residents in northern Wisconsin who are actively engaged in big game hunting and hence, must be taken seriously. 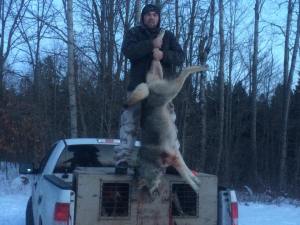 Because of the cultural value to the Anishinaabe and other native people who still inhabit the regions where wolves exist, and because tribal authorities continue to express total opposition to the recreational killing of wolves in Wisconsin, Michigan and Minnesota, Wolf Patrol will continue monitoring lethal control of wolves in Wisconsin and other states where wolves are legally and illegally hunted.