Today as directed by our questioning Sheriff’s deputy, we reported to the Clerk of the Court in Polk County, only to be told that no charges had been filed, so I called the deputy directly, and he told me the bear hunter (pictured here) went to the District Attorney, and was told we would be charged with hunter harassment, and if we had any questions to call him directly, which I then did, and was told it would take a week to review the deputies report to determine whether charges would be filed.

Sooooo, if you’d like to call the District Attorney and RESPECTFULLY request that charges NOT be filed, us three accused would appreciate it. Whatever happens, Wolf Patrol will not cease its operations in Wisconsin, and myself, Benjamin and Stef are unceasing in our belief that we have broken no laws and that citizen monitoring of public hunting practices on public lands must continue. Remind DA Steffen that traveling public roads and photographing others on public lands is not illegal. Hound hunters operate with impunity in Polk County, and if anyone deserves a citation for harassment, its the hound hunters themselves who run dogs across our public lands chasing and harassing public trust wildlife. 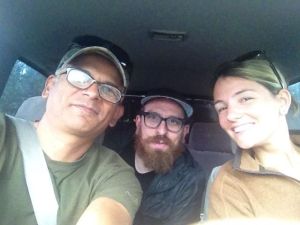