Wolf tracks coming out of the Absaroka-Beartooth Wilderness Area, Montana

On March 30, Wolf Patrol became aware of Montana and the federal government’s decision to lethally remove the Rosebud wolf pack, which roam the Beartooth Mountains, northeast of Yellowstone National Park. Wolves from the pack have been blamed for livestock depredations last year, as well as another this past January, and two cattle deaths on March 25, on a ranch just south of Roscoe, in Carbon County Montana. One of the Rosebud wolves was reportedly killed in early February, and two more wolves were captured and then killed with leg-hold snares set near the cattle carcasses on March 30, according to the USDA’s Wildlife Services. 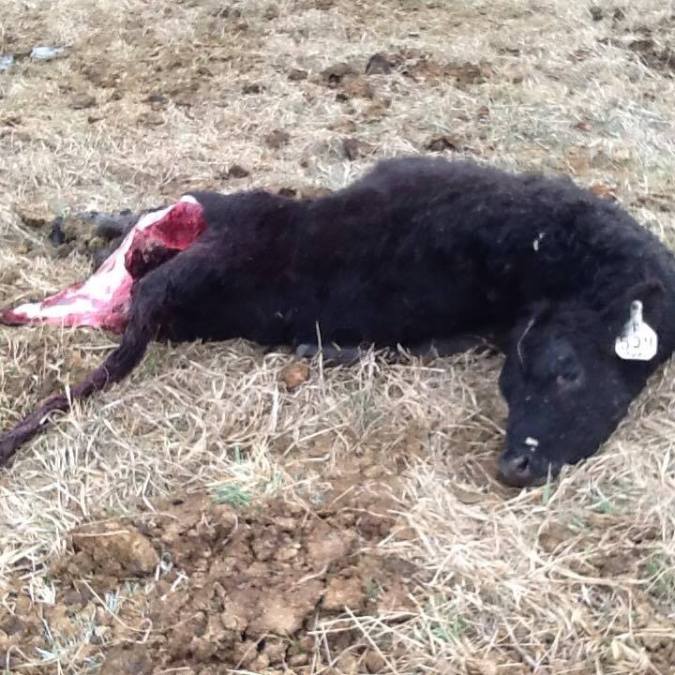 One of two replacement heifers allegedly killed by the Rosebud wolves.

This month marks the end of the U.S. Fish & Wildlife Service’s oversight of Montana’s state management of wolves, which has included the annual recreational hunting and commercial trapping season for wolves. As of 2016, there were an estimated 539 wolves in 126 packs in Montana, according to Montana Fish, Wildlife & Parks. While 210 wolves were legally killed by hunters and trappers in Montana in the 2015-16 wolf season, state, federal and private ranchers are responsible for killing an additional 96 wolves, according to the 2015 Montana Wolf Annual Report.

Statewide, wolves were blamed for 41 cattle, 21 sheep and two horse deaths in 2015. In 2014, it was 37 cattle, 8 sheep and one horse, whose deaths were accredited to wolves. While these depredations are given widespread media coverage, what isn’t talked about is how these numbers represent a minuscule fraction of one percent of normal cattle mortality in Montana, where an estimated 1.5 million cows and 1.2 million calves are produced statewide each year. 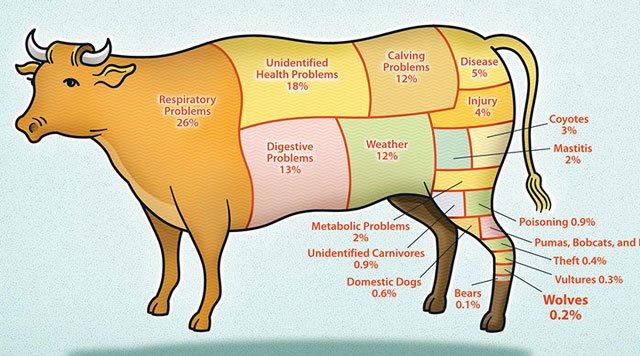 Yet, in what is becoming the norm, more and more packs of wolves, not just the suspected offenders, are being lethally removed by state and federal authorities, following livestock depredations such as those recently blamed on the Rosebud pack.

Wolf Patrol believes the USDA’s Wildlife Services in Montana is using the predictable predation of livestock by individual wolves as justification for lethal removal of entire packs such as the Rosebud wolves. To determine whether this was the case, we dispatched a crew to southern Montana to investigate Wildlife Service’s planned removal of the Rosebud pack.

On April 4, Wolf Patrol set up a base camp near Fishtail, Montana, approximately six miles from the most recent depredation site in Carbon County. Our objective was to investigate cattle ranching practices, search out recent wolf sign and possibly document the federal government’s removal of the remaining members of the Rosebud pack. With the suspected removal activity taking place on private lands, we were unable to access ranches where we believed Wildlife Services had set snares to capture wolves.

Instead, our crew carried out daily patrols on public roads surrounding the cattle ranch where depredations occurred, as well as patrolling the numerous drainages wolves use to travel between the Beartooth Mountains and the Yellowstone River Valley, where they cross an estimated 20-40 cattle operations. We also placed trail cameras at locations we suspected Wildlife Services might be operating.

This part of Montana is an area of predominant cattle ranching, with mostly working ranches and only a few vacation homes. With the Spring calving season in full swing, thousands of black heifers and their calves now occupy ranches in the area, grazing openly on private lands adjacent to the southern fringe of the Custer National Forest. On the ranch where the most recent depredations occurred, cows and calves graze on the banks of Rosebud Creek, which is a natural corridor for wolves and other wildlife that historically inhabited this area in spring.

Despite the overabundance of cattle in the area, both whitetail and mule deer were in abundance and two separate elk herds were also in the area. Bighorn sheep and moose were also seen. In addition to the cattle themselves, other attractants such as an elk carcass and numerous roadkill deer were documented in the Rosebud Creek area. Where cattle are openly grazed away from human habitations, no nonlethal deterrents such as flagry, guard animals or range riders were in evidence.

An elk carcass on Coleman Bench, not far from depredation site.

Ever since the reintroduction of wolves back into the Yellowstone ecosystem, many Montana cattle ranchers have demanded that wolves be prevented from rehabitating areas outside of the national park. An aggressive and long hunting season has meant that many wolves leaving Yellowstone are quickly killed, whether or not they have preyed on livestock. With the continued success of the wolf recovery program in Yellowstone, more and more wolves are leaving the park, looking to colonize territory in their former range.

Critical to the lethal removal of entire wolf packs by state and federal wildlife agents is the practice of radio-collaring individual animals, then re-releasing them to rejoin their pack. Once a livestock depredation has occurred, the so-called “Judas wolves” can then be easily tracked (usually through aerial surveillance) to the entire pack, which is then killed. According to Wildlife Services, on April 8, agents killed the last two remaining members of the Rosebud pack, which were fitted with radio collars.

GPS tracking of some of our patrol routes.

Wolf Patrol remained in the Stillwater & Carbon County area until reports were received that the last Rosebud wolves had been killed. No aerial activity was documented near the multiple cattle operations at the base of the Beartooth Mountains, which leaves us to suspect that the two collared wolves killed on April 8, were shot, not near cattle they supposedly posed a threat to, but we suspect in the high country on public lands, where access is still limited because of existing snow conditions. If this is proven to be the case, than it is evidence that state and federal authorities are using any act of livestock depredation as justification to lethally remove non-offending wolves with no history of conflict. 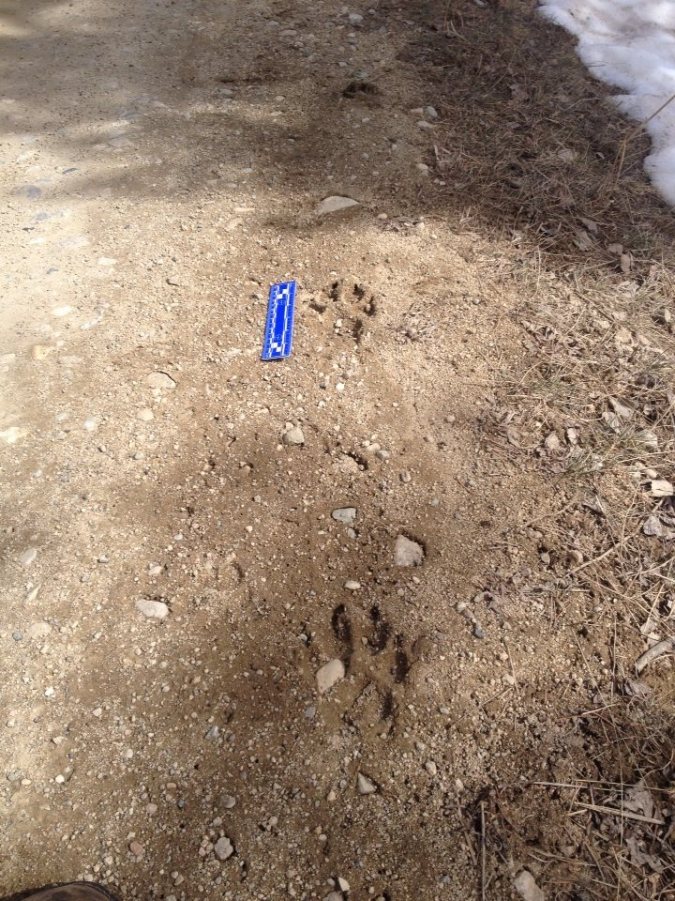 Our field investigation documented wolf sign in three separate drainages Therefore, while the Rosebud pack has been eliminated, we believe wolves will continue to be removed from Stillwater and Carbon counties. Cattle ranchers in both counties will continue to graze livestock on the open range, and it is only a matter of time before more naturally distributing wolves encounter and kill another cow or sheep.

According to Montana’s weekly wolf reports, at least 12 separate wolf packs (including the Rosebud pack) had individuals captured and fitted with 16 radio collars since January 2016. It would appear that Montana is marking the end of its federal management oversight by exercising the strategy of radio-collaring as many new and expanding wolf packs as possible, in order to more easily lethally remove them when depredations can be blamed on any wolf.

Wolf Patrol does not support the lethal removal of wolves blamed for cattle deaths. We believe that such depredations are the cost of cattle ranching in wolf country, and native predators like wolves and grizzlies should never be killed, just because they’ve killed an animal that will be killed anyway. With over 2.7 million cattle occupying Montana lands, and less than 600 wolves, we believe the responsibility should fall back on the rancher to provide nonlethal deterrents when ranching in wolf country, and that wolves should be allowed to occupy suitable habitat within their historic range. 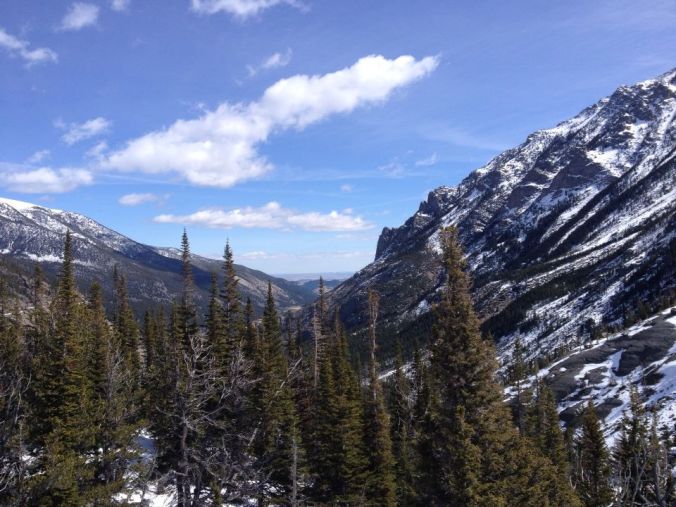 Looking towards cattle country from the wilderness above Carbon County.

Its ridiculous to think that wolves will not kill livestock grazed openly on range that both animals use. After witnessing the sheer number of cows and calves vulnerable to wolf predation in Stillwater and Carbon counties, Wolf Patrol believes wolves should be commended, not killed for taking less than 50 a year. Ending the killing of livestock by wolves was never believed to be possible, which is why there remains an active compensation program to reimburse ranchers who lose livestock to wolves.

Following wolf and moose tracks in the wilderness area.

The larger issue of whether wolves and livestock can share their range will not be resolved by simply killing wolves that kill livestock, ranchers must put into place greater deterrents when grazing livestock, and recognize that occasional wolf depredations must simply become a vocational hazard when operating near large wilderness areas.

Wolf Patrol will continue to monitor the lethal removal of wolves blamed for livestock deaths in Montana and Idaho, and will continue to patrol areas where lethal control orders are in place, not for the purpose of interfering, but to further investigate the suspected killing of wolves with no history of livestock depredations. We do not believe it is an acceptable strategy to remove entire wolf packs when only some might be responsible for depredations, nor do we support the nonlethal removal of native predators from their historic range to be placed forever in captivity. All wildlife, including gray wolves, grizzly bears and bison deserve the right to roam free on America’s wild lands, and until they are, Wolf Patrol will remain as a watchdog of agencies and individuals who kill them.