According to the most recent Department of Natural Resources (DNR) bear hunter survey, bear baiters in Wisconsin placed over 4.5 million gallons of bait in over 82,000 bait sites in 2014, much of it discarded fryer oil and human food waste, and much of it on public lands. Of the 52% respondents in that survey, most Class A & B permit holders (hunters and those licensed to assist…) baited their sites twice a week. Class B permit holders placed an average of 437 gallons, while Class A permit holders averaged 154 gallons.

That’s a lot of food waste and oil to be dumping on our national forest lands! Like many outdoor enthusiasts, I was raised on the ethic that feeding wildlife while your camping was a no-no, and feeding bears was definitely a bad idea. Feeding bears has led to many public safety issues for national forest managers and countless deadly encounters (mostly for the bears), when bears are conditioned to expect human hand-outs. Although its still legal in a handful of states like Wisconsin, bear baiting is a problem that is growing in the Chequamegon-Nicolet National Forest (CNNF) as more and more people take advantage of Wisconsin’s liberal bear baiting regulations.

Bear baiting is completely legal in Wisconsin. With a Class A or B license, anyone can clear some public forest land and start dumping food waste and oil at as many of these sites as you can (or can’t) manage. In northern Wisconsin from late June until mid-October, trucks and ATV’s loaded with 55 gallon barrels and five-gallon buckets of bait are plying the dirt roads of the CNNF, filling hollowed logs, holes in the ground or simply dumping on trees, fryer grease, pie filling and anything else they can get bears to come back and eat.

While Wolf Patrol reports on the impact these baits are having on not just bears, but wolves and bear hunting hounds, we are also discovering a very effective way of combatting illegal baits on public lands. Starting in June 2016, we began collecting data on bear baits in the Chequamegon-Nicolet National Forest. Our hope is that with solid data that shows bear baiting is negatively impacting public lands and wildlife, national forest managers will do the right thing and end bear baiting in the CNNF.

Until then, we are looking at active bear baiting sites in the national forest, especially those in DNR Wolf Caution Areas, and collecting data on the type of bait being used, how close they are to maintained roads and bear hound depredation sites, and when appropriate, reporting this information to DNR law enforcement when we suspect illegal bear baiting activity.

Measuring a bear bait in the Chequamegon-Nicolet National Forest.

Such was the case in July, when we were collecting data on bear baits in the Washburn District of the CNNF, on USFS Road 424, where on any weekend after July you can find loaded bear hound trucks driving slowly looking for signs of where bears have crossed the road to visit a bait. Wolf Patrol monitors are not tampering with baits, so our presence in the area isn’t a secret, we openly park where bear hunters park when refilling their baits, and walk designated trails to bait sites to measure the locations.

Contents of illegal bear bait visible and accessible to other animals.

At the first site we visited on the morning of July 5, we immediately noticed that a large crevice in the bait log left the contents accessible to deer and other animals. Standing on the trail leading to the bait, we could easily see the bright colors of what would later be identified as Lucky Charms, the breakfast cereal. We took measurements and photographs, and proceeded to the next site. 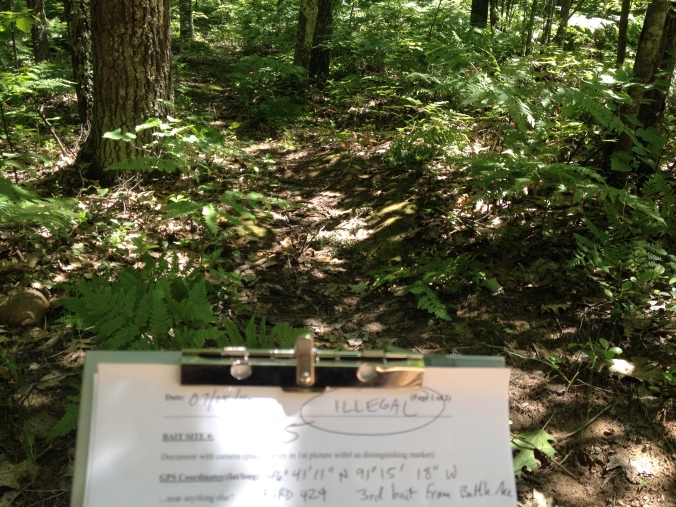 The path leading to a bear bait in the national forest.

We identify bear bait sites by driving less than 10mph on US Forest Service roads we have seen bear hunting trucks driving, looking for the tell tale sign of a human, not animal path. Humans walk flat-footed, (plantigrade), leaving an impression where they have repeatedly walked, as is the case on trails leading to bear baits. When we suspect a bait site, we pull over, and walk the trail. If its a bear bait, we’ll find the site within the first 100 yards. We have never found a bait site further, with the average distance being the legal minimum of 50 yards.

The next three baits we visited on USFS RD 424, that we suspected were operated by the same bear baiter, were all less than fifty yards from the road. Not by much, but enough to make them questionable, its not Wolf Patrol’s job to determine what is legal or not, but once we identify any activity that is a clear violation of DNR bear baiting regulations, we will report it.

Within 24 hours of filing a report with DNR’s hotline, I was contacted by the Conservation Officer (game warden) for the area and questioned further. Wolf Patrol provided GPS coordinates, photographs and other evidence that helped DNR carry out its investigation.

Cleaning up the site of abandoned bear bait.

On August 12, we returned to the sites of the reported bear baits and found them all to be abandoned. At the first site, the bait log with the crevice had been destroyed. We spent about 15 minutes cleaning up the broken fragments of the now defunct bait, picking up pieces of pink flagging left by the baiter, and essentially helping nature return the site to its original condition.

Two years ago, Wolf Patrol didn’t know about bear baiting on public lands. Last year we discovered it, and this year, our efforts have led to the investigation and shutdown of bear baits that were active last month. Any citizen is encouraged to provide information on illegal hunting activity, and it is our hope that other members of the public will adopt their own bioregion, and begin patrolling Wisconsin’s public lands for illegal activity. We may not end bear baiting overnight, but with citizen vigilance, we can help bring illegal hunters to justice and reign in those who operate outside of public view.

The DNR’s 2014 Bear Hunter Survey can be found: http://dnr.wi.gov/topic/wildlifehabitat/documents/reports/bbquest.pdf