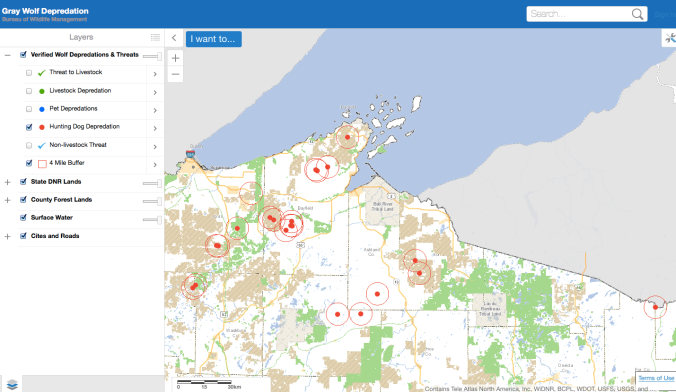 Since Wisconsin’s 2016 bear hound training season began, deadly encounters between hunting hounds and gray wolves have reached an all time high. Why is this such a problem? Because Wisconsin allows not just its residents, but those from out of state to come and train their hunting hounds to follow bear earlier than any other state in the nation, beginning July 1st.

Bear baiting begins in earnest in July as well, earlier than both neighboring states with wolves and bears, Minnesota and Michigan where both baiting and training are only allowed for a short time before the actual fall hunting season. Scientific studies have proven that wolves may become habituated to using bait sites, which are also areas where hound hunters will release their dogs to follow the scent of a bear that visited a bait site.

And while it is illegal to hunt of bait for wolves, Wolf Patrol reported that at least one bear bait supplier is advertising that his bait will also attract wolves in the Summer, strengthening our suspicion that bear hunters are taking matters into their own hands to deal with these conflicts created by their dangerous business and sport.

July is a proven time when gray wolves are also traveling to rendezvous areas with pups and can be fiercely protective and territorial, seeing other dogs running through their territory as a threat and invasion. Many of these violent conflicts are occurring in the same areas, yet bear hunters continue to run their hounds in the areas. Bear hound training and bear hunting season continues until October 11th.

PDF maps of Wolf Caution Areas can be found at the DNR’s gray wolf page.