Northern Wisconsin remains a battleground for federally protected gray wolves, with two separate fights between hunting hounds and wolves occuring on December 23rd & 24th. While hunting bears with hounds ended in October, the practice of hound hunting in wolf territory continues, only now for coyote and bobcat. 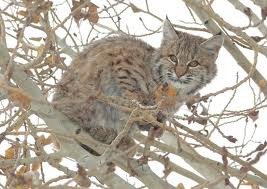 National media attention, in part due to Wolf Patrol’s monitoring of hound hunting and bear baiting, has been drawn to the conflict between Wisconsin’s wolves and bear hunting hounds, with local media and anti-wolf supporters quick to frame the conflict as the consequence of a growing wolf population, although evidence suggests, that while wolves act biologically, filling available habitat, its human behavior that has led to the record number of bear hound deaths in 2016.

Last week’s wolf conflict left one hunting hound dead, and three injured. Thus, 2016 has seen more fights between free-roaming hunting hounds and wolves, than in any year previous, with the final count being 41 hounds killed by wolves, and 10 injured. To date, the only response from the DNR in regards to these preventable conflicts, is to continue to compensate hound hunters to the tune of $2,500 from the state’s Endangered Species Fund, and continue to allow hound hunters to run their dogs in Wolf Caution Areas, including non-residents with no special license requirements.

Since the successful natural return of wolves to Wisconsin in the 1980’s (wolves were not reintroduced, they migrated from surviving populations in northern Minnesota), human hunters have had to come to terms with sharing prey populations with natural predators. As in the Yellowstone ecosystem, (where wolves were reintroduced), previous to the wolf’s return, hunters had a field day regulating prey populations that existed in a vacuum without the natural predation that had existed naturally for centuries.

With the return of the wolf, deer and other prey animals have been effected, not only in the number of animals killed, but also through the return of more evasive behavior. That means that herds of deer peacefully grazing in the open where wolves live, is a thing of the past. Deer in Wisconsin previously had only the nine-day deer season to contend with, but now, they are hunted by their natural predator, the gray wolf, year-around. And despite claims that “wolves are eating all the deer” the 2016 deer hunting season in northern Wisconsin saw a record harvest in many counties, reinforcing the scientifically proven fact that predators help, they don’t hurt, prey populations.

Wolf Patrol is responding to Wisconsin’s unregulated hound hunting practices in wolf territory, by continuing to monitor both wolf and hound hunting activities in known Wolf Caution Areas throughout the winter, as part of the DNR’s volunteer carnivore tracking program. Last year, Wolf Patrol trackers conducted numerous tracking surveys, that helped contribute to the current estimate of Wisconsin’s wolf population, which is estimated to be 866-897 animals, living in approximately 222 packs.

Wolf Patrol conducts its survey in an area of the Chequamegon-Nicolet National Forest that is popular amongst bear baiters and hound hunters, which means it also has a history of multiple conflicts between gray wolves and hunting hounds. In the 2016 bear hound training season and hunting seasons, six bear hounds were killed in the area that Wolf Patrol surveys. As part of a larger investigation, Wolf Patrol is also cataloging bear bait locations in our survey area. We believe as published research suggests, that gray wolves are becoming conditioned to using bait sites as feeding locations, thus setting the stage for many more conflicts with hunting hounds or any dog that trespasses their territory.

On December 27th, we began our first tracking survey of the season, concentrating on Wolf Caution Areas within our tracking block, which are established once a depredation has occurred. Wolf Patrol’s trackers covered 35.5 miles of snow-covered roads, in areas where last year we tracked numerous wolves. Only one lone wolf track was found, one bobcat trail, and numerous deer crossings. No other human activity was detected. 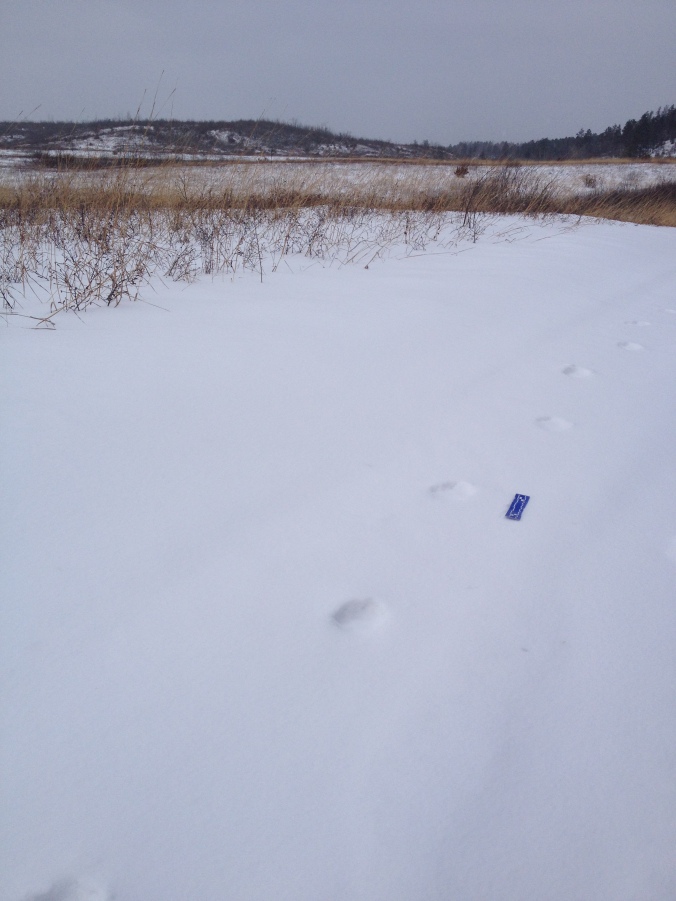 On December 28th, we carried out a second survey that encompassed 25.5 miles of the Chequamegon-Nicolet National Forest, and this time recorded multiple coyote tracks in addition to deer and rabbit trails. In addition, we followed the trail of three hunting hounds, which were dropped in the heart of a Wolf Caution Area on U.S. Forest Service road 251, and followed the road for 12 miles until they were recovered by hound hunters. No recent wolf tracks were recorded. 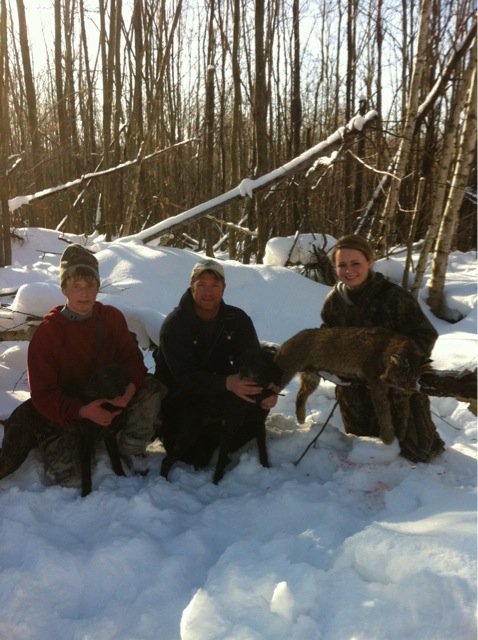 Currently, hound hunting for coyote and bobcat is allowed in Wisconsin, with there being a year-round open season for coyote, and bobcat hunting allowed from mid-October until the end of January. Most coyote and bobcat hound hunting occurs after the first snowfall, when tracking animals becomes much easier. While the DNR’s large carnivore tracking program is focused on recording the number of gray wolves in the state, Wolf Patrol is also recording hound hunting activity in our tracking block, in part because we suspect illegal killing of wolves is taking place in Wolf Caution Areas throughout northern Wisconsin. We believe this because many hound hunters, especially those who have lost dogs to wolves, have publicly stated their intention to kill every wolf they encounter. 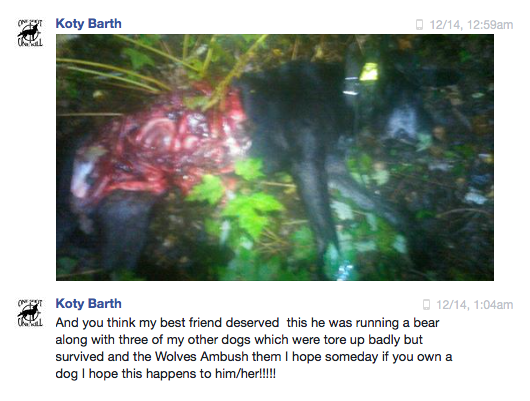 On December 14th, I was contacted by a bear hunter who had a hound killed by wolves on September 17th, and others injured outside of Minong, Wisconsin in nearby Washburn County. I was sent a photo of his dead dog and he wanted to let me know that he wished my own pet dog would also be killed by wolves. Wolf Patrol began investigating the depredation incident as well as the bear hunter, and this is what we’ve found. On September 17, 2016, Koty Barth was running his pack of four Plott hounds with his father on a bear’s trail about two miles east of Minong, near Frog Creek, when according to the hound hunters, the dogs were ambushed by a pack of wolves. The wolves killed one hound and injured two others which were left with bite marks, “all over their backs.”

The next day Barth was on Facebook making a public proclamation that he was intending to kill the wolves responsible for the depredation. In addition, another hound hunter, Benji Schommer, informed Barth of where he had recently seen wolf sign, and acknowledged that wolves had been visiting his bear baits on multiple occasions. On September 18th, Barth also changed his Facebook profile picture to a graphic that depicts a wolf in the crosshairs of a firearm with the words, “One Shot, One Kill.”

Threats like these aren’t being made by wolf haters far away, they are being made by northern Wisconsin residents who regularly run hounds in wolf territory throughout the year, and are adept at taking advantage of the inability of federal and state wildlife officers being able to patrol all the areas used by hound hunters in Wisconsin. 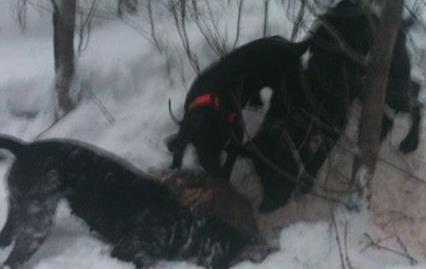 These threats are being documented and reported to the federal agency responsible for protecting wolves, the U.S. Fish & Wildlife Service, but no increased enforcement has been reported, nor has there been any communication that these threats are being taken seriously. It appears that federal authorities want to simply wash their hands with the management of gray wolves, now that they have successfully recolonized Wisconsin, and are hoping legal battles will soon return wolves to state management by the DNR. 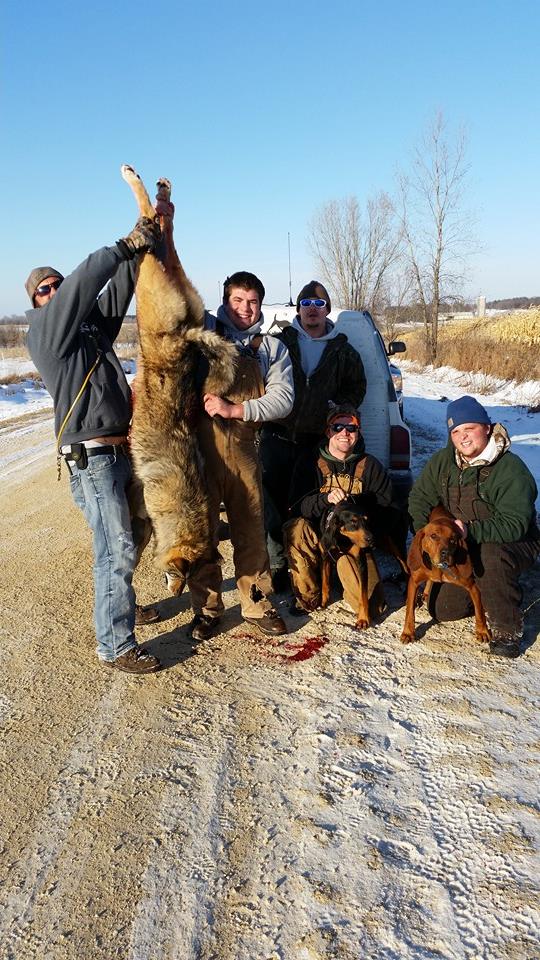 Wolf Patrol believes that the Wisconsin DNR is not capable of responsibly managing the wolf population of Wisconsin. We support DNR conservation officers responsible for the enforcement of wildlife laws, and the many good biologists responsible for providing an accurate assessment of gray wolf populations in the state, but the agency’s lack of regulations governing bear baiting and hound hunting is creating conditions that will continue to lead to many more fights between hunting hounds wolves.

Wolf Patrol believes it is the intention of Wisconsin DNR to address the hound/wolf conflict once state management of wolves is returned, by not only re-instating the hunting, trapping and hounding for gray wolves, but also increasing the yearly quota, in an attempt to drive down wolf numbers. The DNR’s hands are tied by legislative action that mandates that they must enact a wolf hunt, including allowing for the use of dogs.

In addition, both the DNR’s Wolf & Bear Advisory Councils are filled with members who have publicly stated that unless a wolf hunt is allowed, wolves will overrun the state and destroy the deer population. There has also been talk that unless state control of wolves is given to Wisconsin, frustrated anti-wolf advocates will take matters into their own hands and increase illegal poisoning and killing of federally protected wolves.

Wolf Patrol is calling on wolf advocates from not just Wisconsin, but all over the world to contact the U.S. Fish & Wildlife Service and respectfully request that they address the DNR’s hunting practices that are creating a record number of conflicts with federally protected gray wolves and that such practices as bear baiting, hound training and hunting constitute harassment of an endangered species and should be banned on all federal public lands.

Wolf Patrol will be continuing its tracking surveys and monitoring of hound hunting activity in Wisconsin throughout the winter and want to thank all of our supporters who helped make 2016 another year that we were able to provide additional protection to the returning wolves of Wisconsin.

Let’s make 2017 the last year bear baiting, hound training and hunting is legal on our national forest lands, and lets continue to fight for the return of wolves to suitable habitat, not only in Wisconsin, but the entirety of their historic range.

To send your comment to the U.S. Fish & Wildlife Service, please visit:

“I would like to know what is being done in the state of Wisconsin to address the growing number of death threats being made on gray wolves by hound hunters, especially those who have had dogs killed by wolves due to the state’s liberal hunting policies that allow for dogs to be run throughout the state, including by non-residents without any permit requirements. The growing number of hound hunters flocking to Wisconsin now that the state’s Department of Natural Resources does not require permits for bear baiting and/or hound training means many more fights between wolves and hunting hounds will continue. I believe such hunting practices constitute the harassment of federally protected endangered species, and should not be allowed on federal lands.”