Last year, more hunting dogs were killed by wolves than in any year previous, a record 41 dogs, mostly bear hounds, and most killed in areas the Wisconsin Department of Natural Resources (WDNR) designated “Wolf Caution Areas.” But instead of serving as a deterrent, Wisconsin’s unique combination of minimal regulation of hound hunting and $2,500.00 reimbursement payouts to hound hunters, is actually encouraging careless hound hunters to continue running their dogs through federally protected gray wolf territory.

Wisconsin is the only state in the nation to allow bear hound training to run throughout the Summer months, when biologists report wolves are most territorial. This is when wolves with new pups are taking them away from dens for the first time to “rendezvous sites” where they can be taught to hunt. Combine this with the fact that the state two years ago removed the requirement of an actual license to bait for bears and train hounds, and you have the recipe for the disaster witnessed last year.

But instead of owning up to the responsibility to putting hunting dogs at risk, anti-wolf politicians and hunters are using the record number of hound deaths as false evidence that the Wisconsin wolf population is exploding, and thus they need to regain state control so hunters can again kill wolves with guns, traps and packs of dogs. Wisconsin is again, the only state in the nation to allow for the hunting of wolves with hounds.

On July 15th, 2017, the USDA’s Wildlife Services confirmed that two bear hunting hounds were attacked by wolves in Langdale County, in the norheastern portion of Wisconsin, as they were chasing bears during the bear hound training season. The interesting thing is, last week’s depredation occurred less than a mile from where another depredation occurred on August 31, 2016, thus proving that instead of Wolf Caution Areas serving as a deterrent, they are instead like a siren’s call to bear hunters looking to make an easy $2,500.00.

In same email that DNR sends out to “alert” hounders of latest Wolf Caution Area, they are asking that you buy a license plate that funds reimbursements to reckless hound hunters.

And that’s not the worst of it. Wisconsin residents who pay for an “Endangered Species” license plate, with the mistaken knowledge that their money is going towards endangered species preservation, are actually footing the bill for reckless hound hunting. Last year, the state’s “Endangered Species Fund” payed out $92,000.00 to bear hunters whose hounds were killed our injured by wolves while trespassing their range. But instead of addressing this fraud, the state legislature changed the law this year allowing hounders to not wait until the end of the year, but they now can have their checks from the Endangered Species Fund made out to them immediately once its been determined that wolves were responsible.

And still there is more. Hounders who knowingly run their dogs in Wolf Caution Areas are still eligible for the $2,500.00 reimbursement, meaning that in combination with no license requirement for hound training, hounders can take unwanted dogs, literally throw them to the wolves, and collect a virtually unlimited amount of restitution.

Last week’s bear hound depredation will most certainly not be the last. Wolf Patrol is the only organization in the state of Wisconsin that is on the ground in 2016 Wolf Caution Areas, documenting and reporting on the increasing amount of bear hound training and baiting taking place in our national forest lands. We are gathering the evidence we need to inform public lands managers of a increasing problem that could easily be prevented by banning the use of hounds and bear baiting in the Chequamegon-Nicolet National Forest, where 19 bear hounds were killed last year. 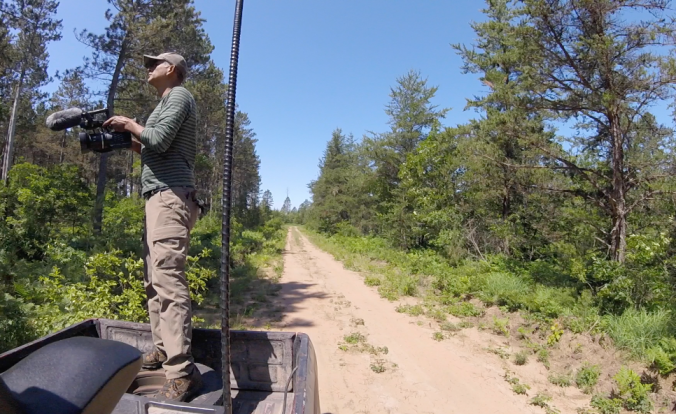 If you believe that this is a practice that needs to end, please send an email comment to Chequamegon-Nicolet National Forest officials demanding that the reckless practice of bear hound training and baiting be ended in our national forests.

TO SEE AN INTERACTIVE MAP OF PAST & RECENT HUNTING HOUND DEPREDATIONS VISIT: http://dnrmaps.wi.gov/H5/?viewer=GRAY_WOLF_DEPREDATION