2016 was a record year for bear hound killings by wolves in Wisconsin, as proponents of a wolf hunt are quick to note, but the undeniable truth all sides agree on is, more fights between wolves and bear hounds are expected, in the lead up to the September 6th opening day of Wisconsin’s actual bear hunt. To date, nine wolf/bear hound “conflicts” have been reported in 2017, since bear hound training season began on July 1st, resulting in ten dogs dying and one being injured. 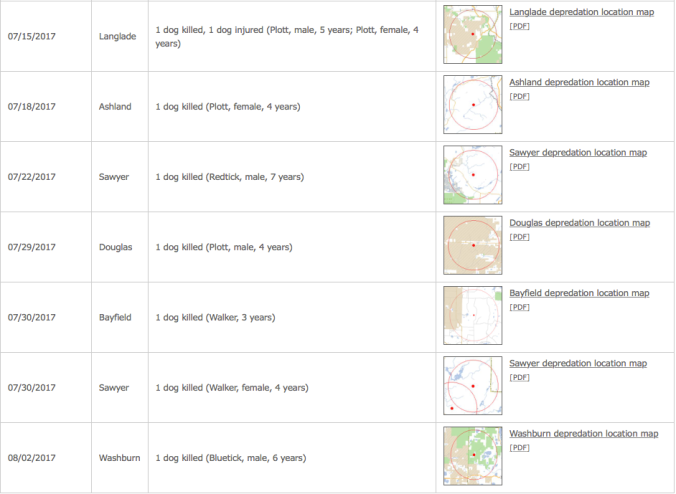 Last year, by mid-August 2016, sixteen wolf/bear hound fights had been reported by Wisconsin’s Department of Natural Resources (WDNR). Do fewer hound deaths by mid-summer represent a downward trend? Let’s hope so, but the statistics don’t look good. Wolf Patrol has compared 2017 bear hound depredation locations and numbers to those in 2016, and this is what we found.

With two more months of bear hound training and actual hunting to go, more fights are anticipated as more hunters prepare for bear season with increased baiting and hound training activity in areas with a known history of wolf/bear hound conflicts. Last year, a total of 23 hounds were killed and three injured by wolves from mid-August to October 1st, with most of the depredations occurring on top of each other, in or near the same location. So far this year, eight of the nine fights between wolves and bear hounds have occurred in areas where depredations also occurred in 2016.

The simple fact is, bear hound depredations occur when hunters loose their dogs and bait for bear in and near wolf “rendezvous areas” where historically, wolf family groups are known to travel in Summer months with young pups, away from the safety of their dens. When packs of bear hounds trespass these areas in pursuit of a bear, wolves are known to respond with deadly results. These locations are deemed “Wolf Caution Areas” by WIDNR and bear hunters are warned to exercise caution, but not forbidden to continue training or hunting with dogs in these areas.

Since 2015, Wolf Patrol has investigated bear hunting practices in areas where wolves have been known to kill bear hounds. In every single Wolf Caution Area, we have discovered active bear baiting locations being used by hound hunters training or hunting with their dogs. In addition, where there’s bear hound training and baiting, there’s hunters who do not comply with minimal regulations on bear baiting.

In 2016, Wolf Patrol reported non-compliant bear baits to WDNR, and again this year, we reported two illegal bear baits less than the required 50 yards from a road in a July 2017 Wolf Caution Area. WDNR conservation officers have told Wolf Patrol that concerns about compliance with bear hound training and baiting regulations in the Chequamegon-Nicolet National Forest are greatest with non-residents who travel to Wisconsin to train hounds.

Measuring a the distance between bear bait and road…this one was less than the legal limit.

Most bear baiting occurring in early Summer is done by hound hunters looking to catch a scent trail that hounds can follow after a bear has visited a bait site. Wisconsin is the only state in the nation where any resident or non-resident, can bait for bear and train bear hounds without a license, in July and August, when wolves are fiercely territorial. But violent fights between federally protected gray wolves and bear hunting hounds aren’t only caused by non-residents, they are caused exclusively by hound hunters in general.

The illegal bait locations we discovered in Ashland County recently, are known as “striker baits” as they are sites used exclusively by hound hunters looking to strike a good scent trail. A Wisconsin bear baiter contacted Wolf Patrol after we reported the discovery of the striker baits in Ashland County, to tell me more about the differences between hound hunters and bait sitters, and why he didn’t support baiting for the purposes of hound training.

He wanted Wolf Patrol to understand that its hound hunters who are causing conflicts with wolves by bringing dogs into wolf areas and running multiple striker baits close to roads, and that many of these people are non-residents encouraged by both the lack of any training or baiting license but also by the financial compensation should any of their hounds be killed by wolves.

Remember, in Wisconsin bear hunters can still receive their $2,500.00 compensation for dogs killed by wolves, even if they continue running their hounds in the Wisconsin Department of Natural Resources (WDNR) Wolf Caution Areas. On August 2, 2017, Public Employees for Environmental Responsibility (PEER) filed a criminal complaint with the U.S. Fish & Wildlife Service alleging that Wisconsin’s Summer bear hound training season amounts to harassment and “take” of an endangered species. That wolves are being harassed by bear hounds to the point of killing them is clearly evidence of a violation of the federal Endangered Species Act. 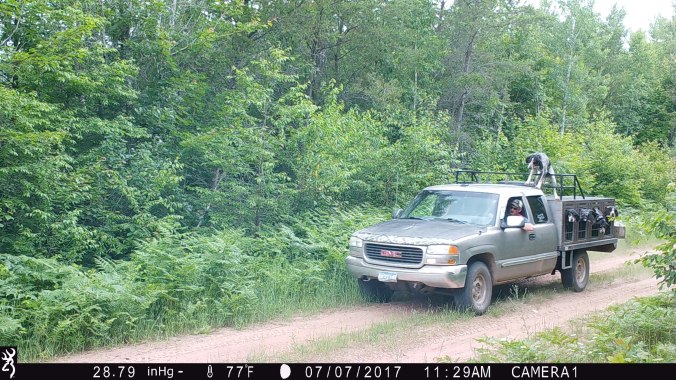 PEER’s complaint also cites evidence that Wisconsin’s bear hound compensation program (which derives its revenue from the sale of endangered species license plates) is illegal as it has compensated repeat offenders and those who were hunting illegally or after their hunting privileges had been suspended.

The Wisconsin bear hunter I spoke with said he’s never had a problem with wolves although he does bait in wolf territory. He believes its irresponsible to run hounds in areas where wolves have killed dogs before, and blames hound hunters for making all bear hunters look bad by doing so. Bear hunters who hunt over bait without dogs try to lure in large bears by learning about the habits of bears visiting their few baits which are often further from roads and tucked away.

The bear hunter went on to explain how Wisconsin’s bear licensing system allows for multiple family members ranging in all ages to apply for kill permits, meaning that as long as one family member has a permit, everyone else and their hounds can hunt as well. Combine the hunting pressure on wolves caused by bear hound training with that of the actual kill season, and it becomes obvious that more fighting with wolves will occur throughout August, September and October 2017.

Probably the best example of the carelessness and irresponsibility of bear hunters that leads to conflicts with wolves can be illustrated by the most recent bear hound depredations incident which occurred on August 11 & 12, 2017 in Burnett County. On August 11th, a Walker bear hound was killed by wolves, just two miles from where wolves killed another bear hound on August 1st of this year.

Both of these bear hound depredations occurred literally in the same area where three bear hounds were killed in 2016. After the August 1st depredation, WDNR designated the portion of Washburn & Burnett County as a Wolf Caution Area. Following the August 11th depredation in the pre-existing WCA, bear hunters returned the very next day to train their hounds, and on August 12th it was reported that two more Walker bear hounds had been killed by the very same wolves.

It’s now up to us to stop this abuse of public lands and violation of federal endangered species protections. Please send your comment to U.S. Forest Service officials asking that bear hound training & baiting be banned within the Chequamegon-Nicolet National Forest: cnnfadmin@fs.fed.us