Since 2014, Wolf Patrol has been monitoring hunting activities in the Chequamegon-Nicolet National Forest (CNNF), where there is a history of conflicts between bear hunters and federally protected gray wolves. The use of bait and hounds to hunt bear in Wisconsin, especially in areas where wolves are protective of their young, has been a recipe for violent fights between wolves and bear hounds in recent years. Last year, 41 hunting dogs were killed by wolves, more than in any previous year on record.

This year, Wolf Patrol has been monitoring bear hunting activities in the Washburn District of the CNNF, where six bear hounds were killed by wolves in 2016. This area of the CNNF on the Bayfield Peninsula, isn’t just good bear habitat, it’s some of the best in the state. More black bears are killed in Bayfield County than anywhere else in Wisconsin (410 bears in 2015). This is also Black Bear Management Zone D, where 1,603 of the 4,643 bears killed last year were taken, and also where every year, bear hounds are killed by wolves.

Wolf Patrol’s research area within the Chequamegon-Nicolet National Forest was also chosen because of the high density of bear bait locations, and the large number of recreational and commercial hound hunters that operate in the area, which is also home to the Moquah, Iron River, Flag River and Twin Lakes wolf packs. Since our investigations began in 2014, we have catalogued dozens of bear baits in the immediate area of bear hound and wolf fight sites, which we believe are largely responsible for the conflict between hounds and wolves.

Bear hunters operating on national forest lands must not only adhere to Wisconsin Department of Natural Resources’ (WDNR) lenient bear baiting regulations, but also to U.S Forest Service regulations such as those governing the limit of days you can camp on national forest lands. In the past, Wolf Patrol has reported bear baits found too close to roads, which are used exclusively by hound hunters, non-resident hound hunters leaving campers and hound kennels for months on end in the national forest, and the illegal dragging of roads.

Another drag found in CNNF.

Bear hunters using hounds place “striker baits” as close as they can to roads (usually, just over the minimum 150′) so they can watch for where bears have crossed forest roads to reach their baits. Once they locate a fresh bear track, they can put their dogs down on the scent, and the chase begins. This is a practice we document every year in this and other parts of the CNNF.

Once there was a time when hunting meant you drove to a remote forest area, parked your vehicle, and for the duration of the hunt, were either on foot, tracking or sitting watching an active game trail. Not anymore, at least for bear hunters. Today in Wisconsin, bear hunting means bait, trail cameras, trucks, satellites, CB radios and packs of hounds.

Every bear hunting day begins with hunters slowly driving roads baits are located off of, to see where bears might have crossed roads. Making this task even easier, bear hunters will pull a drag behind a truck, smoothing the road surface, so the next morning they might easily see who crossed. This is a practice that Wolf Patrol has witnessed every year in the CNNF, and one that is currently being investigated by US Forest Service law enforcement.

In the grand scheme of things, one might argue that hunters dragging dirt and gravel forest roads isn’t a big deal. But when a politically powerful and vocal special interest group like Wisconsin bear hunters lobby against any reform, and argue that they are law-abiding, they deserve to be held to the same legal standards we all must abide to when using national forest lands.

Every year in Wisconsin, over 4.2 million gallons of food waste is dumped in northern forests to attract bears, literally thousands of bear hounds are allowed to run through national forest lands, beginning in July and running all the way until October. Artificially grooming roads to make bear hunting even easier isn’t only illegal, it’s unethical. Yet, every year Wolf Patrol encounters reckless practices allowed under the law in our national forests. 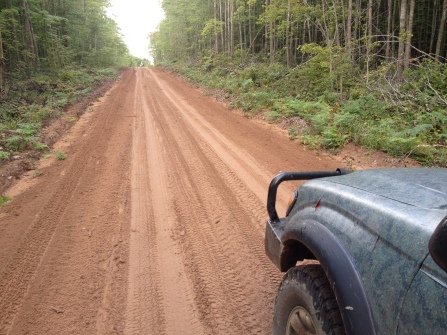 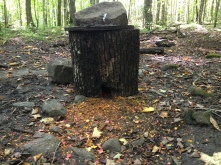 Bear baits that condition bears into accepting food from humans, and artificially make up to 40% of a black bear’s diet in the Chequamegon-Nicolet National, should alone be enough reason for national forest officials to end bear baiting and hound hunting in this part of Wisconsin. Coupled with the conflict created when bear hounds are run through active wolf areas, resulting in dozens of dog fights and deaths a year that must be compensated from the state’s Endangered Species Fund, and you begin to see a pattern of public lands abuse practiced by bear hunters in the CNNF.

Wolf Patrol has joined the Public Employee’s for Environmental Responsibility, Endangered Species Coalition, Animal Legal Defense Fund and other environmental groups who are calling for federal action to end the abuse of public lands by bear hunters in Wisconsin. It start’s here, in the Chequamegon-Nicolet National Forest, where there already exists enough evidence of misuse by a special interest group that treats our national forest lands like their own private hunting reserve.

If you agree it’s time to end bear baiting, hound hunting and the illegal and violent activities that accompany it in the Chequamegon-Nicolet National Forest, please send an email comment to: cnnfadmin@fs.fed.us