So far in 2017, bear hunters using hounds have been responsible for 15 dog fights with federally protected gray wolves while training and hunting with their dog packs in northern Wisconsin. Many of these attacks have occurred on Chequamegon-Nicolet National Forest lands, where its legal to maintain unlimited bear baits from Spring until mid-October. 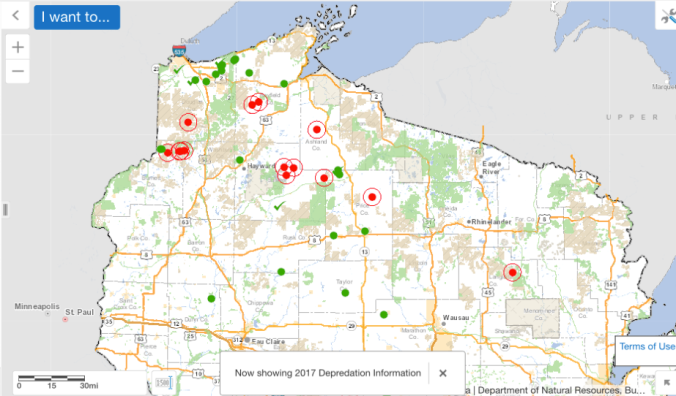 In addition to luring black bears, wolves are also attracted to prey animals like deer who also regularly feed from bear baits. When hound hunters release their dogs to trail bears visiting bait sites, they are attacked by wolves defending their families and territories.

In early September, Wolf Patrol investigated a bear hound depredation in the Chequamegon-Nicolet National Forest, in Sawyer County, where four bear hounds have been killed by wolves so far this year. Multiple bear baits are located in the Wisconsin Department of Natural Resources’ designated Wolf Caution Area, where our trail camera captured these images of wolves spending over two hours at a bear bait location.

If you agree that intentionally feeding bears and running packs of dogs after bears in wolf territory shouldn’t be allowed in our national forests, please send your email to forest officials at: cnnfadmin@fs.fed.us