Recently, Wolf Patrol has been calling attention to Wisconsin’s controversial hound hunting practices and state policies such as hunting from roads and the compensation program for hounds injured or killed by wolves. Our position is that hunting is something that should be done away from roads. Not only because of public safety, but because its not ethical. We also have categorized Wisconsin’s compensation program that reimburses hound hunters up to $2,500 for damages caused by wolves as a “hounder welfare program” that in our opinion enables and supports the cause of the conflict, that is the running of hounds in known wolf areas.

Since last week’s run-in with a coyote hound hunting party outside of Laona, Wisconsin there has been attention to both of these issues, and Wolf Patrol has implied that hound hunters were breaking the law when they were brandishing shotguns on the open road while standing next to their vehicles. We posted photos showing examples of what we find possibly illegal and distasteful about hunting from roads and vehicles, but we didn’t reported it to Wisconsin’s Department of Natural Resources (DNR) because we have learned that while questionable, many hound hunting practices like hunting from roads, is very much legal in Wisconsin.

In defense of these practices, a member of the hound hunting community contacted Wolf Patrol to offer what they believe to be the accurate legal interpretation of the practice of hunting from roads. We want to provide this information so readers can hear different sides of the story and make their own conclusions. This article is also in response to claims that Wolf Patrol misrepresents facts for the sake of garnering more donations.

Wolf Patrol has no desire to misrepresent what we document hunters doing in Wisconsin for the sake of fundraising or any other purpose, and we appreciate the opportunity to respond to those concerns raised by our opposition. We believe that when the public is shown the truth about what hound hunting looks like, they will support our call for reform and changes to Wisconsin’s liberal hounding and baiting practices on public lands.

Some of the hound hunters Wolf Patrol encountered last week in Forest County.

In regards to our claim that hunting from roads is illegal, the hound hunter who contacted us reported that, “some roads are legal to shoot down with a shotgun it just depends on the shell that is in the gun.  This is in place so people can bird hunt along roads.  I don’t agree with it, but your (Wolf Patrol) latest big claims are people are shooting from the road.  Until you see someone fire a shot, you have no claim.”

“If the roads they are on allow shooting with certain shells, then you can’t assume they are doing anything illegal.  It is completely legal to carry a gun on a roadway, and the hunters you photographed carrying guns might not even have them loaded.  I have done the very same thing while bobcat hunting and the warden stopped and talked to me,  checked my gun license and said good luck.  All was legal.”

Wolf Patrol encourages our followers to know what is legal and illegal about certain hound hunting practices, and that is one reason why we document hunters in Wisconsin. When we identify those hunting practices that are legal but we and our supporters believe need to be reformed, such as bear baiting and the length of the bear hound training season in Wisconsin, we document those legal hunting practices, but do not mean to imply that they are in any way illegal, nor do we have any intent to interfere.

Wolf Patrol thinks hound hunters hunting from roads such as witnessed often in northern Wisconsin, should be illegal, but we are not surprised to believe that it is allowed in some circumstances. If Wolf Patrol has ever mistakenly accused a hound hunter in Wisconsin of violating the law, including anyone hunting from the road in Forest County last week, we apologize. It is not our intent to misrepresent those hunters following the rules, nor do we want to promote a misunderstanding of Wisconsin’s hound hunting regulations. We want to provide information on illegal hunting to the authorities when we encounter it, but we also believe in highlighting legal practices to our followers that we think need to change.

Along the Peshtigo River, where illegal baits were discovered in 2016.

During our patrol of the Chequamegon-Nicolet National Forest in Forest County last week, we encountered many hound hunters that we documented hunting from the road but we haven’t alleged that they were illegal, we’ve only responded to the incident in which hound hunters asserted that we did not have the right to film them or travel on a public road.

Wolf Patrol’s strongest claim in regards to the actions of hound hunters in Laona on January 27, 2018 isn’t that they were hunting from the road illegally, but that they lack the authority or right to close a public road while they hunt from it. The right of hound hunters to hunt from roads does not include the right to block and detain vehicles operating on those roads as our truck was. That is a claim we are willing and hoping to make in Forest County or any other court. It is also impossible to determine if a hound hunter is breaking the law on public roads, when their cohorts block the public’s ability to witness what is transpiring during an average hound hunt in Wisconsin.

The other issue we have been criticized for is our representation of Wisconsin’s controversial Hunting Hound Compensation Program. Wisconsin is also the only state in the nation that compensates owners of dogs killed by wolves while hunting other animals. Under the program, the DNR pays hunter up to $2,500 per hound killed during a wolf depredation. In addition, DNR reimburses hunters for any veterinary care sought to save a hound’s life. If the animal dies, the state covers veterinary costs in addition to the $2,500 depredation payout.

According to one Wisconsin hound hunter, “not every owner that loses a dog is compensated $2,500, that is the maximum paid out per dog.  It depends on the assumed value of the dog by the person (In Wisconsin, USDA’s Wildlife Services) that comes to investigate the depredation.  I know a hound hunter that lost 3 dogs last year and was not compensated $2,500 for all 3 combined.” This particular hound hunter asked that we make it clear to our followers that not every hounder who losses a dog gets thousands of dollars, and he also didn’t want to be clumped into the group of hounders who are taking advantage of the compensation program. 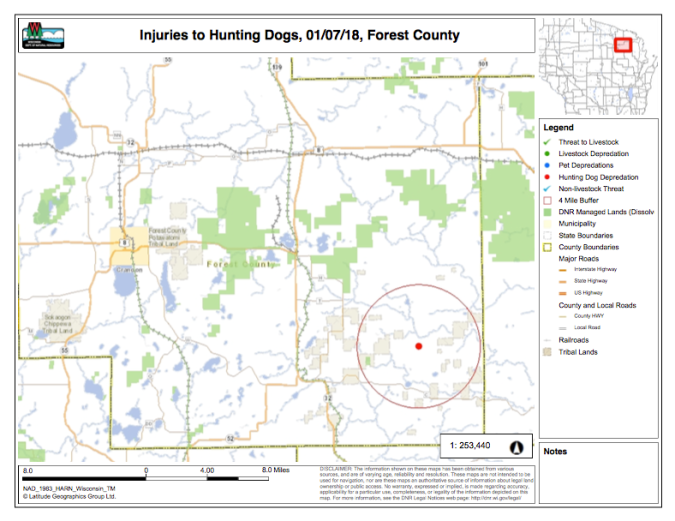 The recent deregulation of  hounding and bear baiting rules by no longer requiring a license to do either, has meant more activity in known wolf areas leading to an increase in conflicts between hounds and wolves. In recent years, compensation payments have quadrupled (funding comes in part from Wisconsin’s sale of endangered species license plates.) and in 2017 DNR paid $99,400 to hunters for hounds killed by wolves.

A recent Public Employees for Environmental Responsibility complaint also revealed how individuals who engaged in hounding on public lands during the 2016 season received compensation for damage or loss of hounds and yet continued to run dogs in DNR designated Wolf Caution Areas, which are made in a four mile radius from where a depredation has occurred.

In one compensation claim, Eli Belisle was paid twice for two hound depredations in the same area within three weeks of each other, which demonstrated his knowledge of the presence of wolves, but a willingness to disregard DNR cautions and continue to run dogs in Wolf Caution Areas anyhow. In another incident a Minnesota hounder was paid $7,500 for three separate hound depredation events that occurred within the same nine day period. 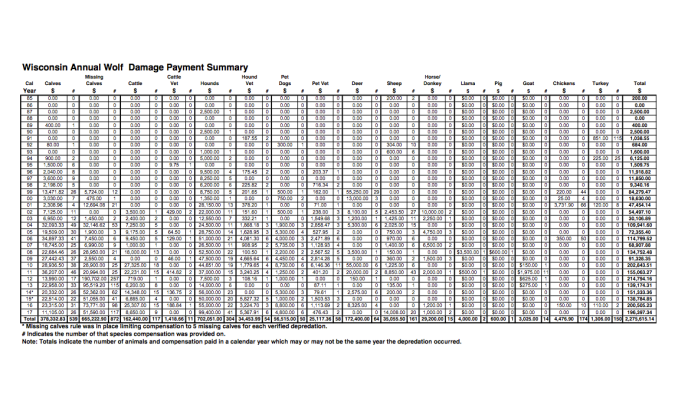 Amount paid out for depredations caused by wolves 1985-2017. Hunting hounds are listed under “Hounds.”

Once again, Wolf Patrol does not mean to imply that every hound hunter running dogs in wolf areas is a “welfare hounder” nor do we mean to imply that every hound hunter that loses a dog to wolves is taking advantage of a system. We’ve spoken to hound hunters who also claim that some hunters do not report their losses. The stated purpose of the compensation program is to mitigate damage caused by the recovery of the wolf population, and we support the continuation of such programs. But we do not support any compensation being paid when a hound hunter decides to run his dogs in an area where wolves have recently killed hounds.