Last week a federally protected gray wolf was spotted near Tettagouche State Park in northern Minnesota with a wire snare wrapped around his muzzle. Calls flooded 911 as the wolf made its way south into the city of Duluth, roaming neighborhoods and streets, unable to eat or drink, until a police officer shot and killed the wolf on February 10, 2018 as he approached a local high school. Volunteers and state and federal wildlife officers attempted to capture the animal but were ultimately unsuccessful.

A local wildlife rehabilitation center, Wildwoods reported that a volunteer happened upon the wolf just north of Duluth and followed him. She walked near him, talking soothingly and sometimes getting within 10 feet. The wolf would stop and look at her, “like he was asking for help”, before he disappeared into the woods.

According to Wildwoods and local media, when 911 operators and Minnesota DNR started getting calls from concerned members of the public about the wolf in Duluth neighborhoods, even though the wolf had the wire snare wrapped tightly around his muzzle, Duluth Police felt they had no choice but to shoot the wolf.

After being shot, Wildwood volunteers were able to examine the animal, “Our exam of this wolf’s body was heartbreaking. Part of a wire snare trap meant to catch small animals was embedded tightly around his muzzle. He might have been able to lick up some snow and sniff roadkill, but he had not been able to eat. He had been starving, and was a skeleton of fur and bones.” 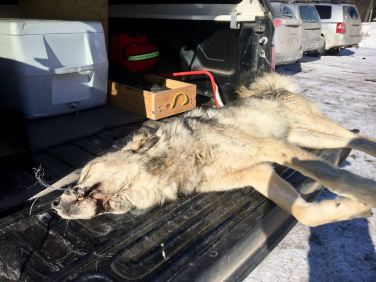 Male wolf with snare around muzzle after being shot.

Before the dust could settle from last week’s tragic shooting of the male wolf in Duluth, another wolf was photographed in Finland, Minnesota, not far from Tettagouche State Park, with a snare wrapped around its neck. As of the time of this writing, the second wolf is still roaming freely in the area. According to Christian Dalbec, who photographed the wolf on February 13, the wolf, “looked healthy except for the dried blood on the open gouge under it’s neck.”

This isn’t the first time snares intended for smaller coyotes, bobcats and fox have caught wolves instead. In Alberta, Canada photos from trail cameras in 2016 depict two wolves suffering from snares embedded in their necks. In a separate case, biologists (pictured below) were able to remove a snare from a wolf and the animal recovered and was released. 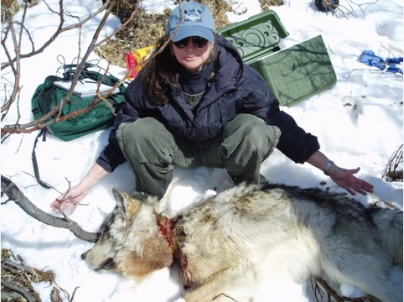 Alberta wolf with snare around neck.

Black wolf with snare around neck.

In 2008, in Denali National Park, Alaska, visitors reported two wolves with snares around their necks, one was so restricting the animals circulation that the wolf’s head looked more like a bear because of swelling that trapper’s refer to as “jelly-head” because the snares will ultimately cause a wolf or coyote’s brain to rupture.

Snares like most commercially available traps that are sold legally in Minnesota, Wisconsin and Michigan are indiscriminate and often kill unintended prey. Allowing the use of indiscriminate snares and traps in areas with known wolf populations should be illegal as it constitutes the harassment and illegal take of a federally protected species. But it isn’t, so in Minnesota and Wisconsin its legal to set snares in wolf territory for coyote, bobcat and fox.

Bobcat captured with snare around waist.

Sedated bobcat before surgery to save its life. 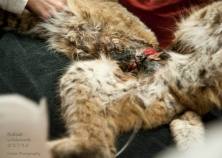 This isn’t the first time snares have been a problem in northern Minnesota, in February 2015, A landowner photographed a bobcat with a snare tightly cinched around his midsection, cutting into his flanks. Wildwood volunteers again responded and were able to live-trap the bobcat, which was taken to a local vet, who sedated the animal,  and shaved around the wound to expose the snare embedded in the bobcat’s flesh. There were prominent wounds to both of the bobcat’s flanks. After cutting away the snare, other injuries included both upper canine teeth broken, likely from trying to chew through the anchor of the snare, which was broken and dangling when the bobcat was rescued. 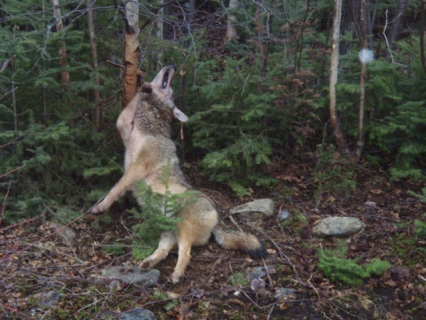 Also in February 2018 outside of Hinkley, Minnesota, a DNR conservation officer assisted another local trapper with an incidental catch of a large, adult bobcat that had its rear leg caught in a snare. After a lot of patience, and careful use of a catch pole, the barely injured bobcat was successfully released. 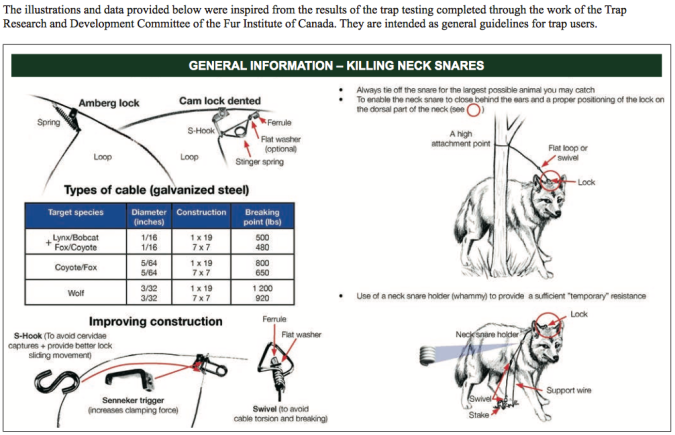 So now that we’ve established that the legal use of snares is a problem in northern Minnesota, let’s talk about the people using them. In December 2014, a MN DNR conservation officer found a live wolf in a snare north of Duluth, not far from where the recent snaring incidents occurred. In the same area where the snared wolf was found, DNR conservation officers found numerous other snares matching the snare type and bait as that used to take the wolf. After a two year investigation, Douglas Anthony Marana, 70, and Roderick Robert Kottom, 68, of Chisholm, were charged with four counts of illegal trapping activities after investigators seized 638 illegal snares set by Marana and Kottom in January 2017, in a large area of St. Louis, Itasca, Koochiching and Lake Counties. 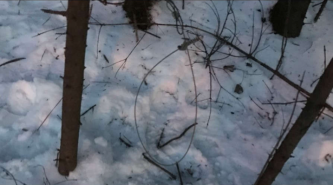 MN DNR photo of one of hundreds of illegal snares.

A MN DNR enforcement supervisor in Grand Rapids said, “This number of sets has not been surpassed in Minnesota before. Our average for fail-to-attend traps or snares would be one to 10. Ten would be a big number in any other case.” Despite the literal hundreds of illegal traps operated by the poachers, Marana was sentenced to probation and loss of trapping rights for one year. Kottom has a long history of violating Minnesota trapping rules, having been convicted in recent years of possessing a mounted lynx, 40 unregistered fisher and pine marten pelts, and for failure to check traps and snares as required by law.

For more information on how snares kill wolves and other wildlife please visit: http://www.wolfmatters.org/snaring.html

Minnesota’s regulations on snares & traps can be found on Page 51 at: http://files.dnr.state.mn.us/rlp/regulations/hunting/full_regs.pdf