Today we are sharing the last of the videos from Nicholas Valenta’s Facebook page, which show him directing his hunting hounds to mercilessly tear into a wounded coyote as he and he friends stand by laughing, watching…and filming. Hunting coyotes with hounds with Valenta isn’t only dangerous for his prey, but anyone within range of his friends shotgun blasts. In this and other videos, hunters can be seen running through the snow with what’s presumed to be loaded weapons taking shots at coyotes as they run.

Wolf Patrol is presenting these videos to the public because we know this is only the tip of the iceberg as far as cruelty and animal abuse go with the “sport” of hunting coyotes with hounds, which is at its peak in winter and early Spring. In the past, Wolf Patrol has been accused of staging illegal bait sites that we have discovered, or doctoring video footage to present a biased perspective to our followers. However, every one of these videos and photographs were taken by the hunters themselves, and shared amongst the hound hunting community without a single member questioning the illegality or ethics of such practices. To Wolf Patrol, that is not surprising, as we know setting hounds on live animals is a regular practice to anyone familiar with the sport. 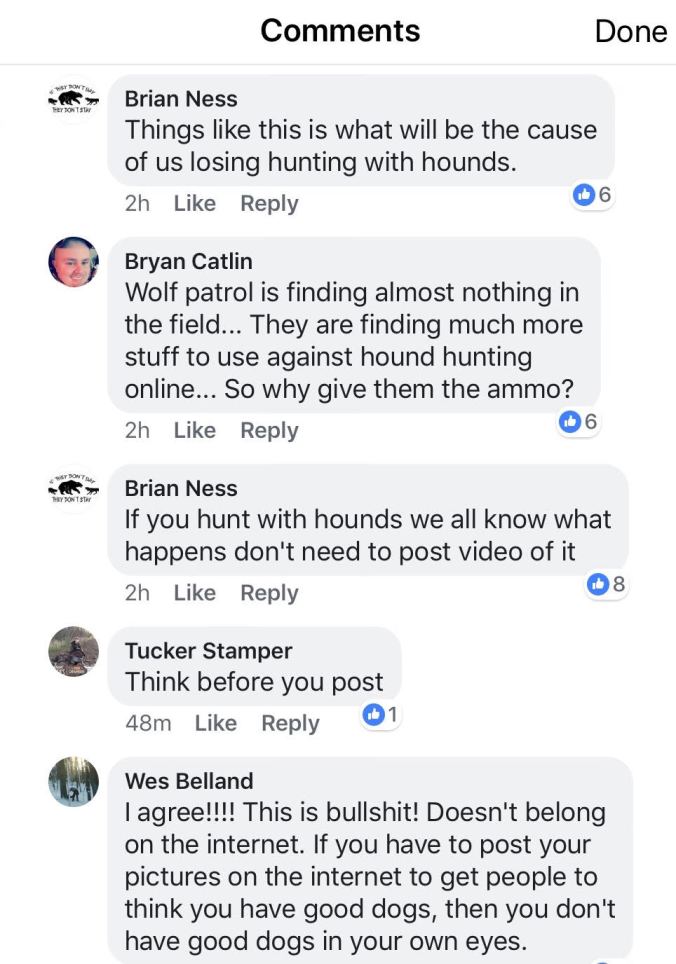 Since our expose began, many Wisconsin hound hunters are scrambling to remove offensive and illegal material from their social media pages and calling on each other to not publish anymore of their gruesome videos. Nicholas Valenta’s entire Facebook page has been removed, as hound hunters desperately attempt to destroy evidence of their illegal practices. Don’t worry, Wolf Patrol’s Wildlife Crimes Unit has already copied many such videos before our campaign began and we will be sharing them with any interested law enforcement agency investigating.

Moving on, Wolf Patrol would now like to highlight the commercial trapping and snaring practices of one of Nicholas Valenta’s hunting partners, Aaron Reivitis of Cecil, Wisconsin. Reivitis is no stranger to Wisconsin conservation officers, having been cited in recent years for failing to check his traps and remove their victims once a day, as is required by law, and harvesting a black bear out of season. 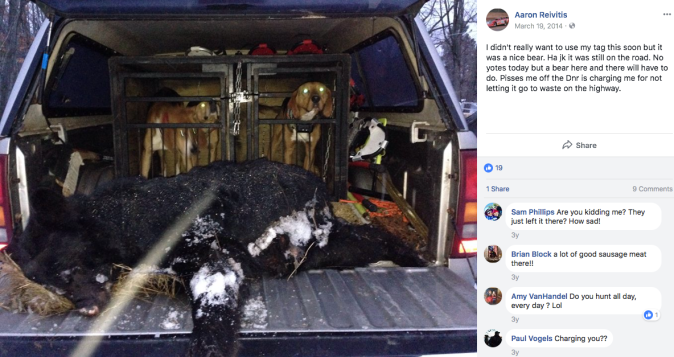 While the use of foothold traps and wire snares is inherently cruel, Wisconsin’s trapping regulations require licensed trappers to humanely kill any intentionally caught wildlife immediately. For trappers like Reivitis however, there is always time to take a selfie for his Facebook page as the trapped or snared animal suffers in silence.

Wolf Patrol is cooperating with Wisconsin DNR conservation officers investigating the coyote hounding practices of Nicholas Valenta and Aaron Reivitis, and on March 9, 2018 were contacted by Chief Warden Todd Schaller who informed us that his agency was taking these matters seriously and sharing our posts with investigating officers. If there was such a thing as an ethical hunter amongst either Valenta or Reivitis’ Facebook friends, both men would have been reported years ago, as this evidence has been on their social media pages since the early 2000’s.

Licensed hunters and trappers like Valenta and Reivitis have forfeited their rights to hunt and trap in Wisconsin by participating in serial abuse of public trust wildlife, let’s hope the DNR’s investigation into their acts leads to their loosing their rights to ever hunt in Wisconsin again. Only by making an example out of such behavior can we ever hope others will be discouraged for participating in similar illegal and unethical practices on our public lands.

Another successful “hunt” for Reivitis.