Over three years ago, the Wisconsin Department of Natural Resources (WDNR) was tipped off to the hound training activities of Scott Brandt, age 28 of Stevens Point, Wisconsin. In one video published on Facebook in 2015, three of Brandt’s hunting hounds can be seen fighting a large raccoon as he offers encouragement. In two other videos published in 2014, Brandt uses domestic cats to train his hounds. It is illegal in Wisconsin to allow your hunting dogs to fight raccoons, coyotes and other wildlife, yet much evidence exists on social media of the practice amongst hound hunters in Wisconsin, Michigan, Minnesota and other states.


In a November 12, 2015 email from a deputy with the Marathon County Sheriff’s Department, the individual alerting WDNR to Brandt’s hound training practices was told that Brandt’s case did not meet the statutory requirements for animal cruelty, according to an assistant to the District Attorney. The email states, “The violation that stands out in this case is the use of the cat to train coon dogs, which is regulated by the WI DNR. The Warden that works that end of our county has been in touch with Scott (Brandt) in regards to his training methods. As far as I know, no charges have been filed against Scott.”

According to the informant, a Portage County Sheriff’s detective also did not see any legal wrong-doing since the raccoon in the March 2015 video wasn’t killed by Brandt’s hounds, it being legal to injure the raccoon. The cats Brandt also used for training purposes supposedly weren’t injured (although terrified and tormented) so its presumed the use of cats to train hounds in Wisconsin is legal, although roll cages by law must be above ground.

According to emails provided by the WDNR informant, the investigating WDNR conservation officer forwarded evidence of Brandt’s use of live raccoons and domestic cats to train his hounds to DNR officials in Madison, who advised against pressing charges in the Brandt investigation. Because the investigation is now closed, Wolf Patrol is sharing what amounts to video evidence of legal hunting hound training & trapping practices in Wisconsin.

A search of Brandt’s Facebook page reveals other graphic animal abuse, such as his clubbing of a raccoon with a baseball bat, something Brandt admits is his preferred method to kill wildlife. In another video, Brandt is seen clubbing, stomping and drowning an otter caught in one of his traps in 2010. In other videos of his legal trapping activities, Brandt shoots a raccoon in the mouth and poses with live fox, coyotes and raccoons in published Facebook photos. Many of these photos are deemed legal hunting behavior, thus revealing the level of animal abuse and cruelty that is inherent in much of Wisconsin’s legal hound hunting and trapping practices. 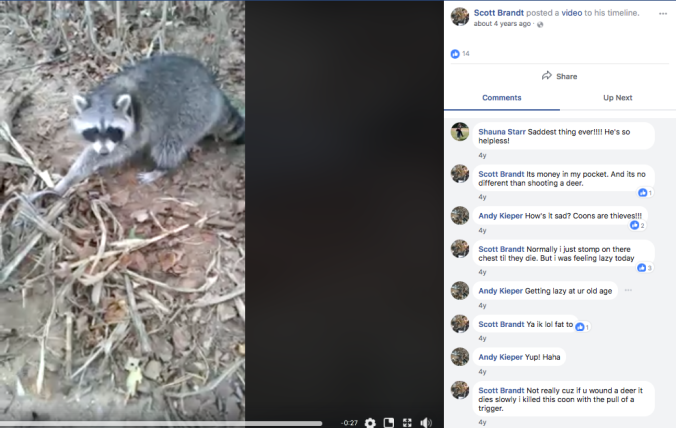 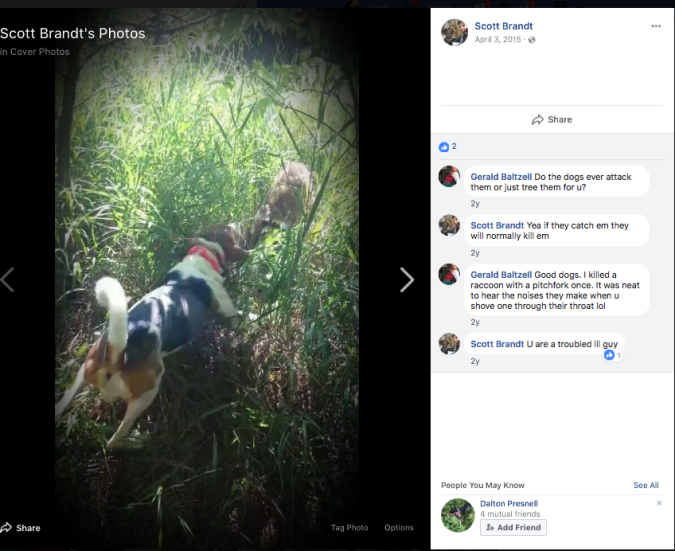 Brandt defends his behavior openly and publicly in his Facebook posts, and that is one reason why Wolf Patrol is featuring it here, because Steve Brandt is a truthful representation of legal hound hunting and trapping in Wisconsin, otherwise the WDNR would have prosecuted his highly unethical hunting and trapping activities which he broadcasts openly on social media. In a 2014 Facebook video where Brandt shoots a trapped raccoon, he states, “Normally I just stomp on there (sic) chest til they die. But I was feeling lazy today.” 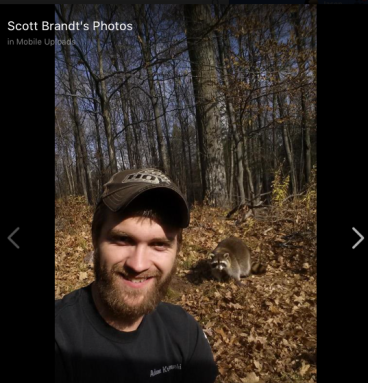 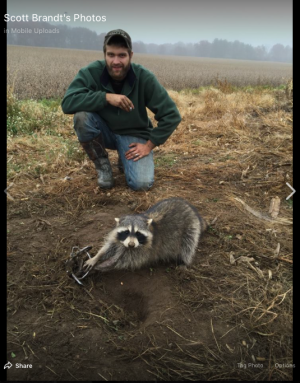 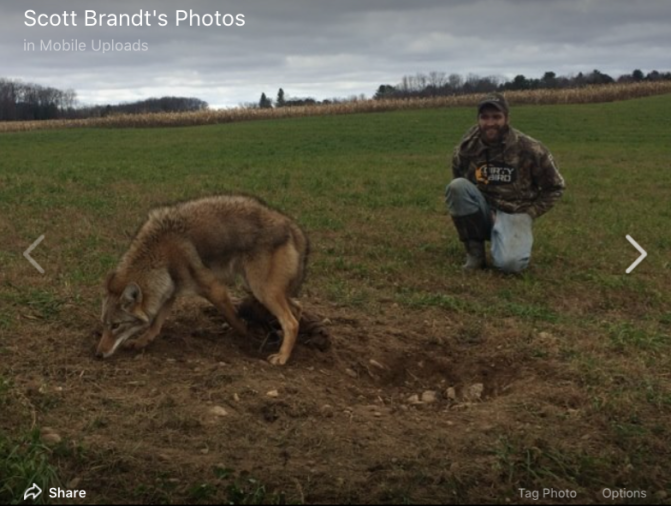 Wolf Patrol is opposed to Brandt’s treatment of wildlife and hunting privileges in Wisconsin, not only because it is cruel and inhumane, but also because it is a form of financial income for Brandt, who sells his furs on the open fur market. Cruelty to animals in Wisconsin should be illegal whether its committed to wild or domestic animals, and serial animal abusers like Brandt shouldn’t be allowed to financially benefit from their commercial exploitation of our public trust wildlife. 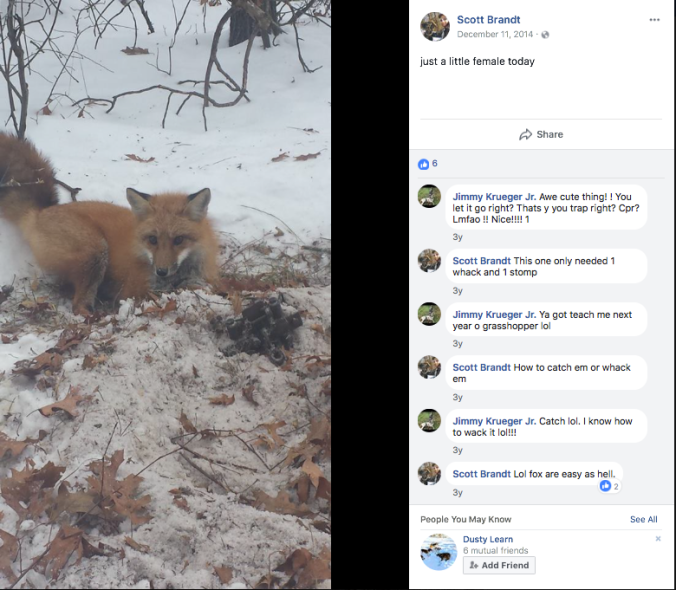 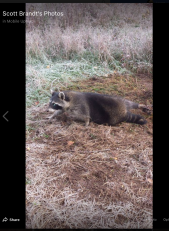 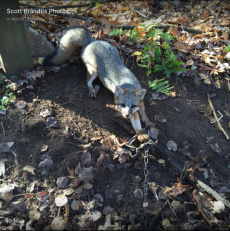 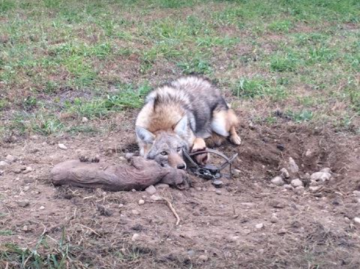 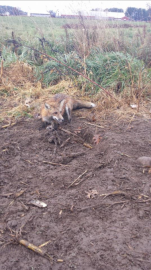 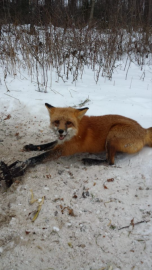 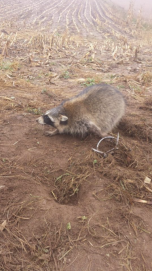 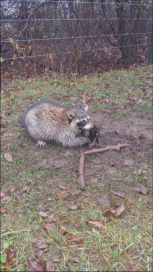 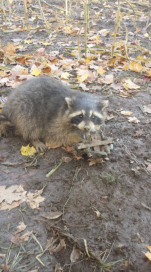 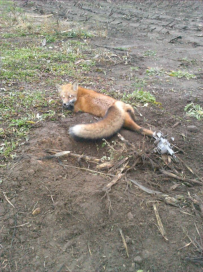 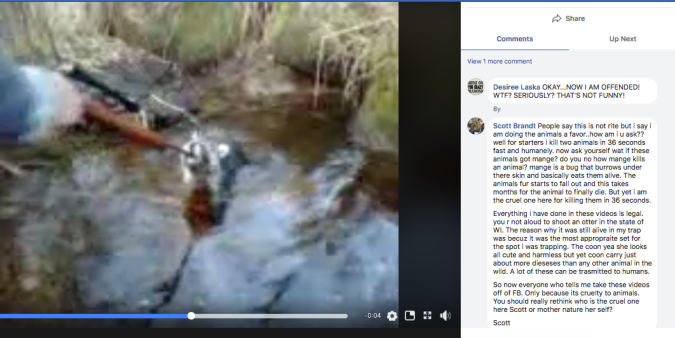 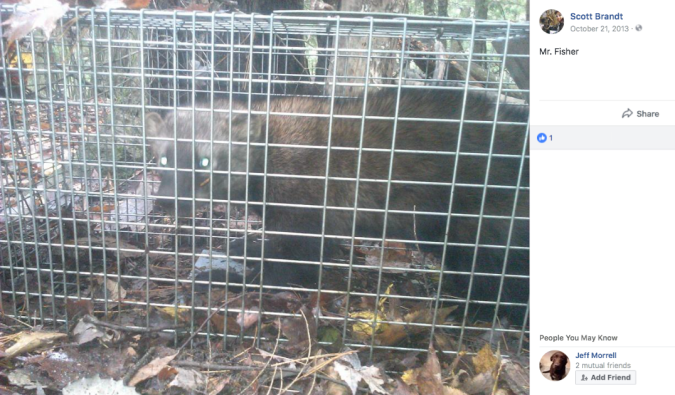