Wisconsin’s unregulated two-month bear hound training season is continuing to create a disaster for wildlife in the Chequamegon-Nicolet National Forest. Not only are black bears repeatedly chased in hot summer weather, often with young cubs, but they are becoming addicted to sugary human food waste hounders use as bear bait. Beginning July 1st, hound hunters from across the nation flock to Wisconsin to take full advantage of their ability to train bear hounds without a license. According to the last known survey of bear hunters in 2014, over 4 million gallons of bear bait and over 15,000 dogs were used to aid in the hunting of bears in Wisconsin.

An ad from Bob’s Bear Bait in Appleton, WI

The Wisconsin Department of Natural Resources (WDNR) has no idea how many hound hunters are training their dogs to chase bears this and every Summer. Nor is there anyway to determine just how much bear bait is being dumped in our national forests and other public lands, as both baiting and training for bear hunters does not require any license or registration. Anyone can dump hundreds of gallons of bear bait in the forest, as long as it is used to aid a licensed bear hunter.

A black bear fighting with one of Jonet’s hounds during bear hound training season.

Many hound hunters, like Jonet Plotts featured in this video, are commercial operators charging hundreds of dollars to take young pups out to learn how to chase bears. In the Chequamegon-Nicolet National Forest, these commercial hunters are laying waste to our public lands by dumping hundreds of gallons of oil and food waste to attract bears to sites where hounds could then follow. Hound Hunting operators like Jonet Plotts, who are paid to train hounds, should be licensed and regulated to operate in the Chequamegon-Nicolet National Forest. 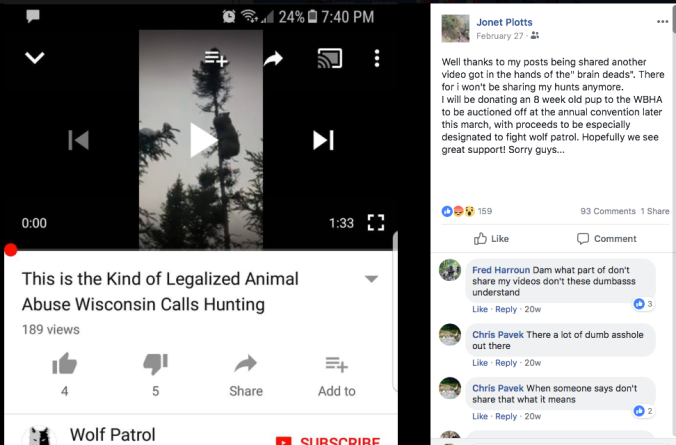 This month, Jonet Plotts also posted photos of an orphaned black bear seen during bear hound training season, which led to Forest County hound hunters encouraging Jonet Plotts to illegally kill the animal, “We need this bear to become your number one priority during kill season, an orphan running the woods alone is nothing but trouble.” said Carl Bailey III of Crandon, Wisconsin, “I hope we can trust in you to take care of this problem in future days.” Another hounder suspected that the bear cub could also be used in illegal ways stating, “Better be careful if it gets out that you’ve got an orphan your gonna have people fighting over it come kill season.” 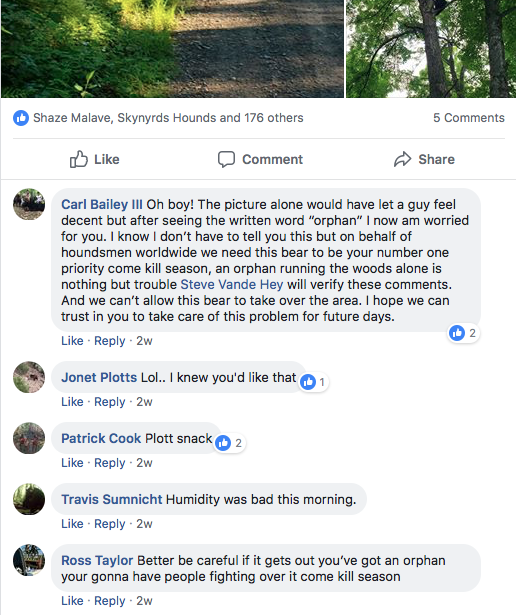 And much of Wisconsin’s bear hound training & baiting practices occur in active wolf territory, where the predators are known to consider bear hounds unwelcome trespassers, often killing and eating the offending dogs. Since July 1st, when bear hound training began, there have been three reports of wolves killing and injuring bear hounds as the chased bears through Summer wolf territory. Help Wolf Patrol clean up bear hunting practices on our national forest lands! Its time to call for an end to hunting practices that negatively impact wildlife on our public lands!

Please send your comment to Chequamegon-Nicolet National Forest officials at: 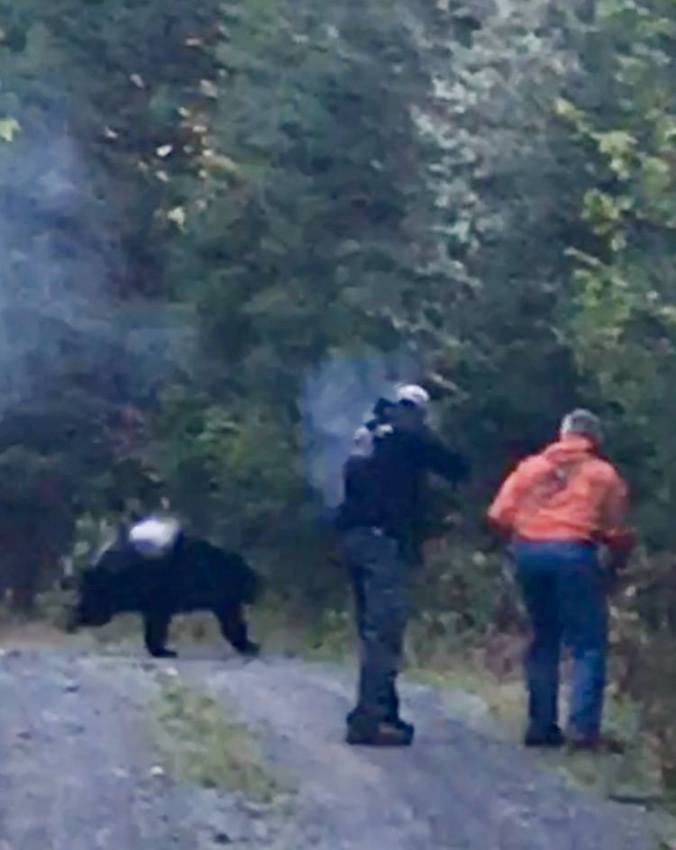