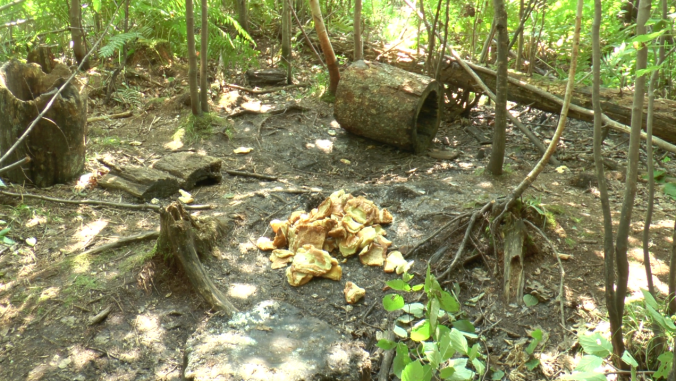 Because a license is no longer required to bait for bear or train hunting dogs to chase them during the summer training season, Wisconsin’s Department of Natural Resources (WDNR) doesn’t know how many bear baits are used by hunters or how many dogs are chasing bears in Wisconsin, mostly on county, state and national forest lands.

But WDNR, bear hunters and Wolf Patrol all know that almost all conflicts between bear hounds and wolves during the training season occur in areas with a high density of bear baits and hound training activity. Intentionally baiting for bears also attracts wolves, who have been documented this summer feeding from bear baits in northern Wisconsin: https://www.youtube.com/watch?v=IrlIlGGYdQM&t=8s 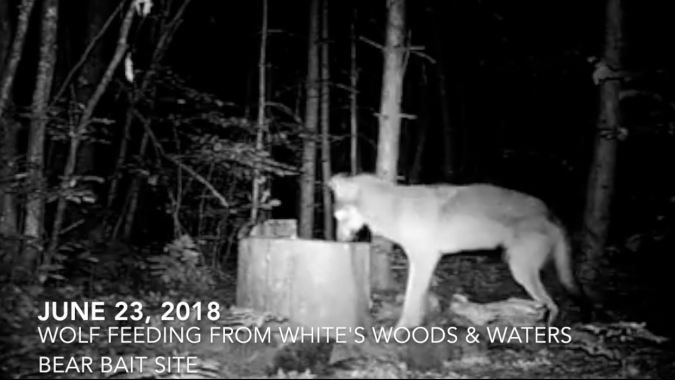 Running hounds from and near bait sites after bears have become conditioned to feeding from them, also means wolves will view the hounds as trespassers in their feeding grounds, and attack the often young and unsuspecting bear hounds. In addition, Wisconsin’s summer training season happens when wolves are taking young pups away from their dens for the first time and are protective and territorial to packs of loose dogs running through these wolf “rendezvous areas”. 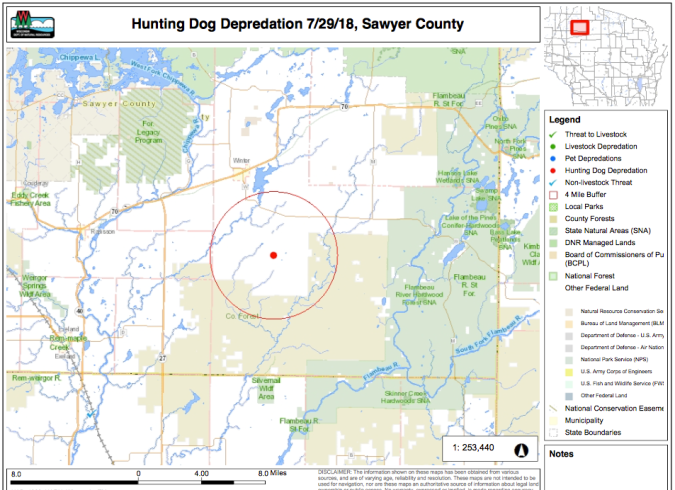 On August 11, Wolf Patrol monitors visited the site where wolves killed a 9-month old bear hound on July 29, 2018 in Sawyer County, Wisconsin and found four active bear baits in the Wolf Caution Area, two of which were out of compliance with WDNR bear baiting regulations. 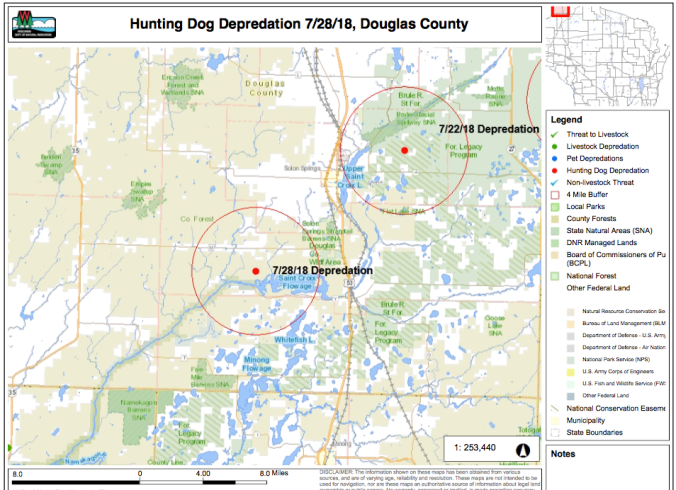 Later the same morning, WP monitors visited the site where wolves injured an 8-year old bear hound on July 28, 2018 in Douglas County, Wisconsin and found two more active bear baits in the Wolf Caution Area, both of which were out of compliance with WDNR bear baiting regulations. 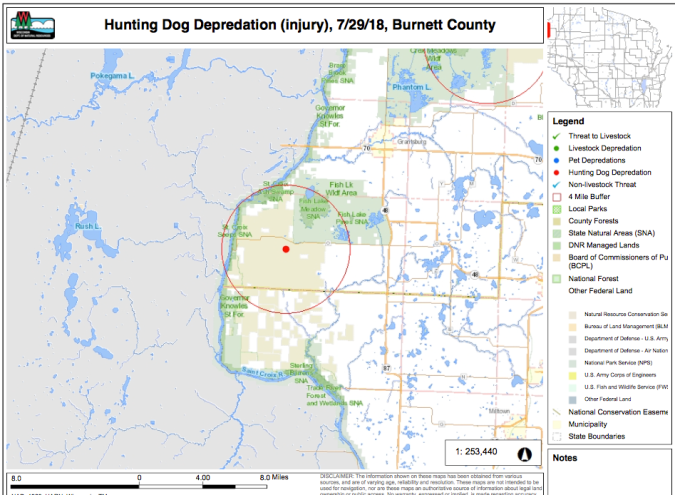 On August 12, WP monitors visited the site where wolves injured a 4-year old bear hound on July 29, 2018 in Burnett County, Wisconsin and found four active bear baits in the Wolf Caution Area, three of which were out of compliance with WDNR bear baiting regulations. 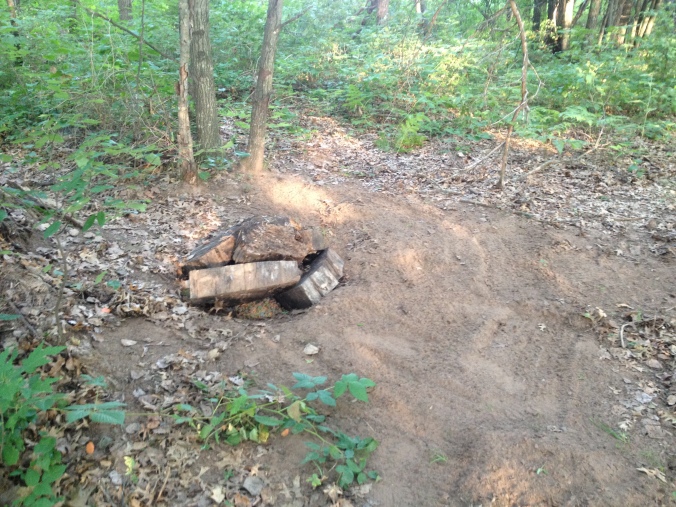 Wolf Patrol is certain that its monitors did not find all the bear baits out of compliance in these three particular WDNR designated Wolf Caution Areas. But as we have documented in past bear hound training seasons, hound hunters who don’t care about dogs being killed, are more likely to also not observe Wisconsin’s minimal requirements for bear baiting. 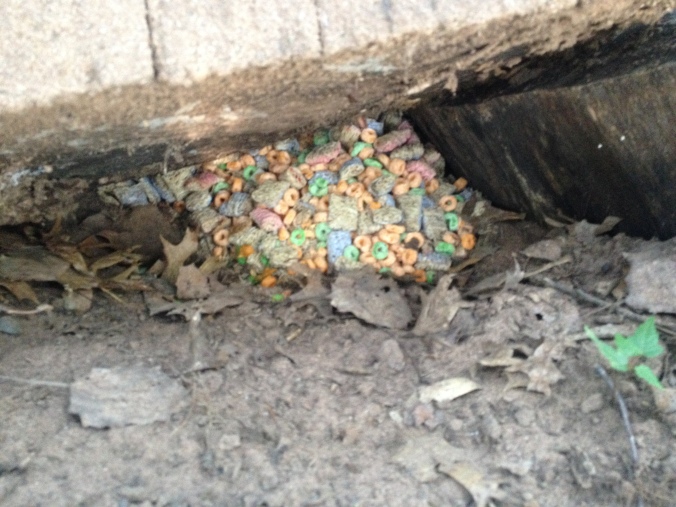 Whether in compliance with baiting regulations or not, there is still undeniable evidence that summer bear baiting and bear hound training activity is the cause for the annual violent conflict between wolves and hunting dogs in Wisconsin.

THE FOLLOWING IS THE ACTUAL WOLF PATROL REPORT FILED WITH WDNR’S VIOLATOR HOTLINE 08/14/18:

Dear Officers,
On my recent drive over this past weekend (08/10-12/18) through WDNR designated wolf caution areas, I found six active bear baits that I believe are out of compliance with the requirement to be at least 50 yards from public roads. All the baits were measured from the established public roads we were driving on when we found the baits in county forest lands.

I was in these areas as a matter of interest, to document active bear baiting and hound training continuing in wolf caution areas. I was only in all of these areas for a very short time and am sure I would have found more baits out of compliance had I had the time to look. I wanted to visit all the existing wolf caution areas in Oneida, Sawyer, Douglas, Burnett and Bayfield counties, so only was at each for a couple hours.

Nonetheless, I believe its likely that whoever is responsible for these baits reported, might also have other baits in these areas out of compliance, based on their not adhering to the 50 yard limit. Its of great concern to me that such a disregard for minimal regulation is taking place in areas that the DNR is already instructing hunters to use caution. Anyhow, thanks for your service!

Sawyer County baits out of compliance are south of the town of Winter, and off County Road W, just West of Tower Road, on the first open gated road on the south:

Douglas County bait out of compliance is in West of Gordon, off of South Mail Road and off unmarked Arnold Road:

Burnett County bear baits out of compliance are south of Grantsburg, and south of the intersection of County Road O and Johnson Road: 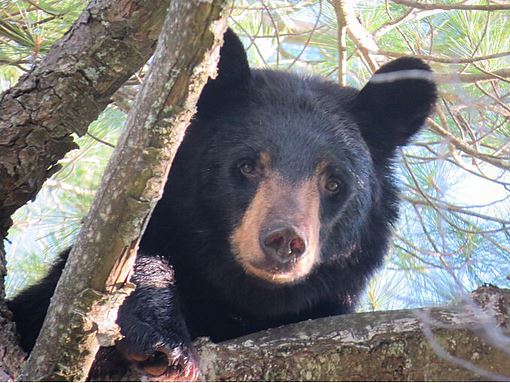 Wisconsin Natural Resources Board (all board members): 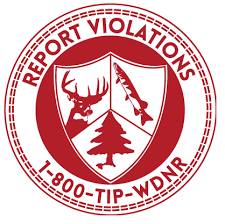