On the last day of Wisconsin’s 2018 black bear hunt, the Wisconsin Department of Natural Resources reported the 21st deadly encounter between bear hunting dogs and federally protected gray wolves. Most of the violent conflicts between hounds and wolves occurred in the Chequamegon-Nicolet National Forest of northern Wisconsin, where bear baiting legally begins in April, with bear hound training season following in July, and finally the kill season in September. Over 12,000 bear hunters took to the field in 2018, killing over 4,500 bears. Over 95% of all black bears killed in Wisconsin are taken with the aid of bait and/or hounds. 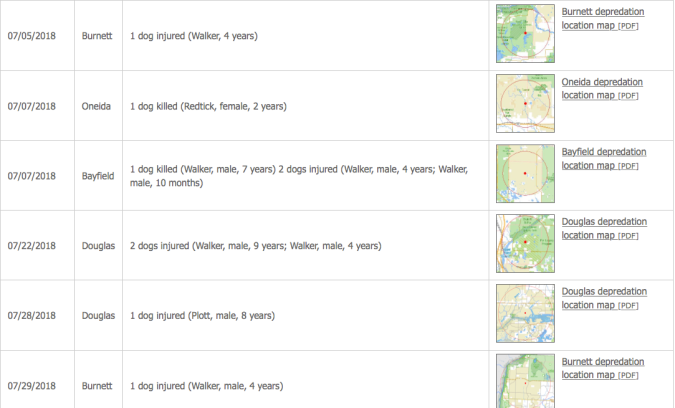 In Wisconsin there are no laws limiting the number of bear baits anyone can use on public lands. Bear hunters are not even required to register their baits, and unlike neighboring states like Michigan, its even legal to use chocolate as bear bait despite it being toxic and dangerous to bears and other canines. The combination of baiting and hound hunting in Wisconsin has created an annual conflict that has become a part of Wisconsin’s bear hunt. Hound hunters use bear baits to attract bears close to roads where their dogs can catch their scent.

The problem is, not only bears are attracted to baits, but wolves and other wildlife as well. When wolves become conditioned to feeding from bear baits, they don’t only chase off the bears, but will consider any loose dog in the area competition for the intentional feeding site. In the 2018 bear season multiple wolves were reportedly visiting baits in northern Wisconsin and Michigan. As predicted, these baiting sites were largely to blame for the over 20 bear hunting hounds killed by federally protected gray wolves on public lands between July-October 2018. 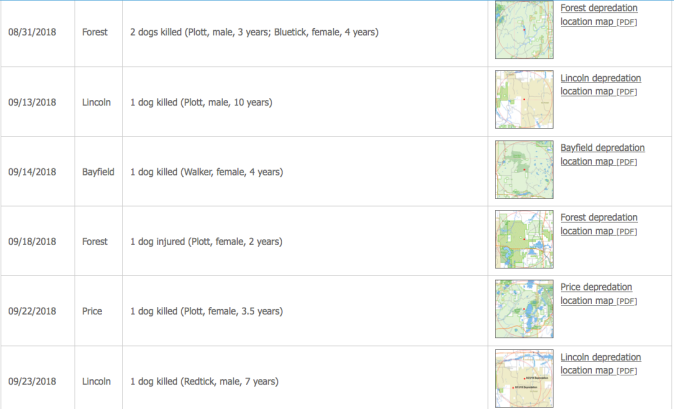 Wolf Patrol is asking Chequamegon-Nicolet National Forest officials to end the practice of bear baiting and bear hound training on our national forest lands where its causing more deadly encounters with hunting dogs than any where else in the nation. This is a preventable problem that Wisconsin’s Department of Natural Resources is responsible for allowing with its virtually lack of regulation over bear baiting and hound training. Wisconsin’s national forests belong to everyone, not just bear hunters. Legalized hunting practices that cause deadly conflicts with wolves need to addressed before more dogs and wolves are killed.

Please join us in calling for end to the deadly conflict between bear hunting dogs and Wisconsin’s wolves!