Wisconsin trapper John Oens with yet another trapped wolf.

Every year since gray wolves were returned to federal protections in 2014, Wisconsin trapper John Oens has been catching them in his coyote traps. Wisconsin’s recreational/commercial trapping season begins in October, and is the cause of many “incidental” trapping incidents involving legally protected wolves.

For trappers like Oens, the illegal captures have become an easy way to gain attention on YouTube, with videos of the wolves being released from his traps receiving millions of views. Most viewers are unaware that Oens himself is the cause of what has become his annual wolf captures. This kind of state sponsored harassment of a federally protected species to boost YouTube views should be condemned by Wisconsin’s Department of Natural Resources (WDNR) and prosecuted as the harassment of federally protected wildlife.

Another grave example of how Wisconsin’s coyote trapping season is threatening gray wolves in the state, is the actual incidents when incidentally trapped wolves are illegally killed by trappers, as happened last December outside of Spooner, Wisconsin.

On the morning of December 27, 2017 an off-duty police officer from the small town of Siren, Wisconsin was driving home when he saw a wolf caught in a trap west of Spooner near the Yellow River. The local officer called the Wisconsin Department of Natural Resources’ (WDNR) Violator Hotline before returning to the location of the trapped wolf. Upon returning, he saw a green Chevy truck with a dog box, that the officer recognized as belonging to a local bear hunter, Alfred Paulson. He also noticed that the wolf was no longer in the trap.

Less than an hour later, a couple from Madison, Wisconsin discovered a dead wolf hidden in brush in the same area, and as they were leaving encountered Paulson who admitted that he had released a wolf earlier from one of his coyote traps. Later that afternoon, the off-duty officer again returned to the location, this time following the blood trail from Paulson’s trap site, where he first saw the wolf, to where the dead wolf was now hidden under a spruce tree with a single gunshot wound to the head.

WDNR conservation officer Jesse Ashton responded to the officer’s tip, collecting the dead wolf and other evidence from the scene of the crime, before running the license plate from the green hound truck seen near the trap site. The truck was registered to Paulson, who was visited by WDNR officer Ashton in Spooner. Paulson denied killing the wolf, but said he had discovered the dead animal dragged away from his coyote trap site.

On July 10, 2018, officer Ashton returned to Paulson’s residence with US Fish & Wildlife Special Agent Darin Brandenburg and a search warrant, to look for the .22 caliber rifle that was used to kill the wolf last December, according to findings from the USFWS forensics laboratory. Again Paulson was questioned, and finally when shown the findings on the four .22 shell casings collected from his trap site, admitted to shooting the wolf with his .22 rifle and dragging the body into the woods where it was later discovered.

This incident is also evidence that many trappers are also Wisconsin hound hunters, waging a campaign against federally protected wolves that they believe are responsible for killing hunting dogs. Wolf Patrol has long reported on the public support amongst hound hunters for wolf poaching. Public threats on social media regularly follow depredation incidents, especially in areas where bear hounds have been recently killed, as is the case in Burnett County, where Paulson killed his wolf.

During 2017’s Wisconsin bear season, five conflicts were reported between bear hounds and wolves in Burnett County where Paulson and many bear hunt. In addition, according to WDNR, on December 22, 2017, just five days before Paulson trapped and killed his illegal wolf, a hunting beagle was injured by wolves in Burnett County. During the 2018 bear hunt, two more wolf conflicts with bear hounds were reported with another four occurring just north, in Douglas County. 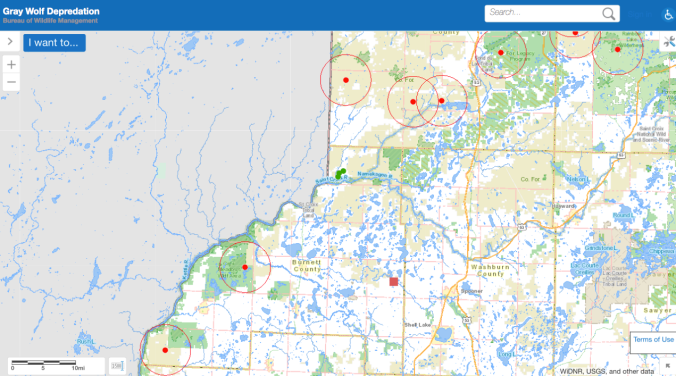 A recent study published in the Journal of Mammalogy and conducted by the University of Wisconsin found that WDNR has been systematically underreporting the illegal killing of wolves in the state. The study analyzed data collected from dead wolves from 1979 to 2012, and found that 37% of those wolves reported as roadkill were most likely killed by gunshot.

The Alfred Paulson wolf poaching case is moving forward with a status conference planned for this November 2018. Please join Wolf Patrol in calling for the maximum punishment in this latest example of Wisconsin’s war on wolves!

If you would help, letters in the Paulson case are now needed!

Here’s the addresses and a sample letter with more information, remember you must send a copy of your letter to each of the listed parties:

I am writing in earnest to ask that you find Alfred Paulson guilty of poaching an endangered species, the Gray Wolf, and penalize him to the maximum extent possible. I volunteer for the WDNR as a carnivore tracker, frog & toad surveyor, turtle monitor, monarch butterfly monitor and I do water clarity monitoring as well. I value all wildlife for their importance to a diverse and healthy ecosystem and thoroughly enjoy seeing and hearing them daily. Gray Wolves provide many ecological benefits and this is born out in science research as well.

Law enforcement criminal complaints show this wolf was alive in the trap when a citizen discovered it. Alfred Paulson did not incidentally catch this wolf. He is stating that he was trapping for coyotes and that is a lie based on the following two facts:

Trappers have incidental catches all too frequently. If the incidentally trapped animal is alive, the WDNR asks only that the animal be released. If the released animal is a protected/threatened/endangered animal, the ethical trapper is encouraged to report it to the WDNR and that would be it.

If this indeed was an unintentionally trapped wolf, why would Alfred Paulson not have simply released the wolf? Mr. Paulson planned to intentionally kill this wolf. Mr. Paulson knew there were wolves in the area, as he is a bear hound hunter. Furthermore, the report also states the complainant recognized “it [the owner of the Green Chevy truck] as a subject who hunts bears with dogs in the area…” According to WDNR’s “Wolf Pack Count Details”, there are wolves identified in that area/tracking block as well as surrounding tracking blocks.

I track in a block adjacent to the block where Alfred Paulson hunts for bears with his dogs and where he also traps. It is a well-known fact that hound hunting dogs who are sent off of bait sites into areas where wolves are raising their young, are often killed by the wolves who are protecting their territories. It is also a well-known fact that some hound hunters will/have killed wolves that live in their hound hunting areas so they will not interfere with their dogs. Alfred Paulson knew wolves ran in his hunting area and laid his trap in a spot likely to catch a wolf.

Wolves should not be persecuted and are protected by federal law. The Gray Wolf was extirpated from Wisconsin back in the 1950‘s by people such as Alfred Paulson. Wolves have been persecuted for centuries and it continuing to this day. Since then, Wisconsin has spent millions of dollars and numerous decades to monitor wolves and their migration back into Wisconsin from Minnesota. A 2014 survey by the WDNR showed that a majority of northern rural WI residents want a robust population of wolves in our state. We are one of only a handful of states fortunate enough to still have wolves.

Regretfully, a minute but lethal segment of WI society subscribe to the “SSS” (shoot, shovel and shut-up) mentality which, as stated earlier, is what extirpated wolves to begin with. They are willing to illegally kill a wolf for a misguided long-held hatred of wolves and they believe they won’t get caught.

Alfred Paulson was charged under state statutes/guidelines rather than federally charged with civil and criminal penalties. Cruelly poaching a federally protected species violates the Endangered Species Act and draws a much harsher punishment (https://www.fws.gov/le/USStatutes/ESA.pdf).

Federal agencies defer to the states and expect criminal penalties will be imposed. Examples of penalties for this crime at the federal level under statute: Fines up to $50,000; 6 months in jail and license suspension. In the recent Michigan wolf poaching case decided on 2/20/18, Honorable C Joseph Schwedler sentenced Donald Curtis Aberly of Crystal Falls to both fines and restitution of $2,255, probation and revocation of hunting and trapping privileges.

Additionally, I encourage you to consider imposing the following:

1) Attendance at a wolf education seminar/workshop;

2) Attendance at a wolf education training program that would follow with Alfred Paulson attending schools to talk w/ young students about the concepts learned in the wolf education program including the value of wolves.

Thank you for your work on this case and the opportunity given for citizen input.