It has come to light that the leader of a group of nine arrested and charged in Florida with multiple illegal bear hunting acts, had close ties to Wisconsin bear hunters and was a regular attendee to the annual Wisconsin Bear Hunters Asscoiation’s annual convention in Rothschild, Wisconsin.

Training bear hunting dogs was the primary occupation for Bo Wood and William Landrum, and Facebook is full of their videos showing hunting hounds chasing and treeing bears with up to 16 dogs. Wood was also a hunting companion to many Wisconsin bear and bobcat hunters who were grateful to Wood for his training of their bear dogs.

Under the name, “Bayed Solid Kennels” Wood ran a hound training network that charged up to $750 for monthly dog training across state lines. Capitalizing on the varying bear hound training and hunting seasons across the country, Wood traveled almost year-round, often leaving his home in Lake Butler, Florida to train dogs during Wisconsin’s long summer bear hound training season which runs from July 1st until the beginning of September. Than Wood traveled to Utah, New Mexico where he also offered to guide hunters to trophy quality black bears.

Wolf Patrol has long opposed Wisconsin’s lack of hound training and hunting regulations because it invites abuse, especially from non-resident’s like Wood who capitalize on the leniency offered by Wisconsin’s Department of Natural Resources long hound hunting seasons. Not only are non-residents like Wood welcomed to train and hunt bear without any required license in Wisconsin, but as has been shown, Wood was actively training hunting hounds used to hunt bear in Wisconsin. 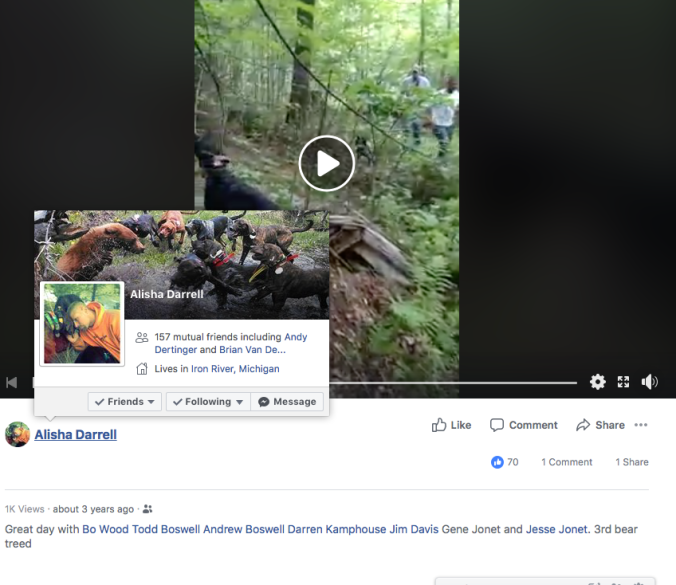 Wolf Patrol is calling on Chequamegon-Nicolet National Forest officials to reign in the practices of bear hound training, hunting and baiting on our national forest lands, especially in areas where deadly conflicts between federally protected gray wolves and hunting dogs annually occur. In 2018, there were 24 fights between wolves and hunting dogs in Wisconsin, most occurring on CNNF forest lands.

Please send your email to: