These efforts would see an end to contests such as “PJ’s Cabin Store’s 2nd Annual Coyote Contest” which begins at midnight tonight around Solon Springs, Wisconsin. The one day coyote killing contest will take place in an area that has seen multiple deadly fights between gray wolves and hunting hounds such as those used in PJ’s Coyote Contest. In the first year’s event, 32 hunters participated, taking a total of 14 coyotes with the winner receiving an $800 cash prize.

Many of the hunters participating in PJ’s Coyote Hunt are bear hunters who have come into conflict with wolves while running their dogs in the Summer hound training and Fall bear season. In addition to the use of hounds, some hunters will be using electronic and voice calls and high-powered rifles with thermal scopes to shoot coyotes at night. 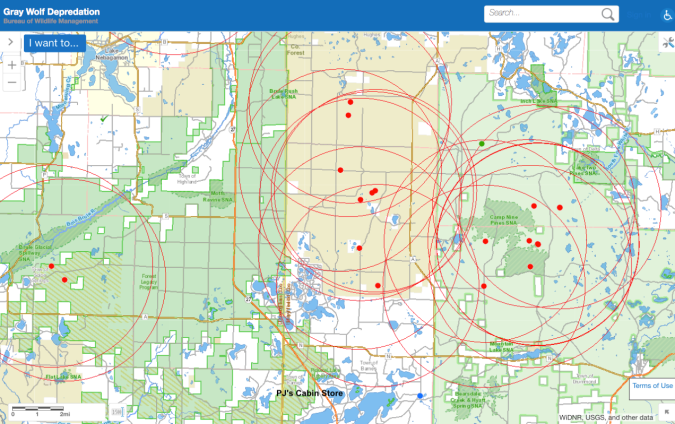 PJ’s Coyote Hunt is offering a 100% payout to the hunter who kills the largest coyote. Wolf Patrol is opposed to coyote killing contests, especially those in Wisconsin wolf country that offer prizes for the largest animal killed. We believe such an incentive increases the likelihood that a federally protected gray wolf will be mistakenly killed by an overzealous coyote hunter.

Participants in coyote contests are required to place blocks in the mouths of dead coyotes. February 2019.

Wolf Patrol has been monitoring coyote killing contests since 2016, when illegal baits intended for wolves and coyotes were discovered during a coyote contest on national forest lands in Forest County by citizen monitors. This winter we are gathering evidence from coyote and other wildlife killing contests in our effort to educate the public and to support the passage of Senate Bill 30 and any other similar legislation.

Resolution adopted by Dane County Board of Supervisors, March 8, 2019.

If you are a Wisconsin resident, please contact your elected representative to express your support of Senate Bill 30 and any other legislative effort to change statutes that would result in banning wildlife killing contests, such as that advanced by Dane County’s Board of Supervisors. Anyone can also write the Wisconsin’s Natural Resources Board’s Liaison asking that action be taken to ban wildlife killing contests in Wisconsin.