Freyja was poisoned near her farm on April 4, 2019 in Iron River, Wisconsin.

Don, a farmer whose name we’ve changed at his request, has been protecting sheep on his Iron River, Wisconsin farm with Livestock Guardian Dogs – LGDs – over fifteen years. In that time, he has never lost a dog to a predator, including wolves. “They have been extremely effective,” he says of his dogs, “we have had very few predator issues, lost a few chickens over the years, but never a dog or sheep.” 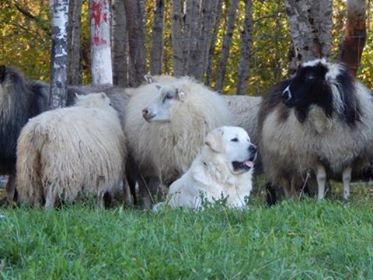 LGDs are raised with the livestock they guard, so they are more bonded to their livestock than to people. They live with the livestock full time. A puppy can cost $2000 or more, “and two to three years of training and maturing before they’re effective and safe with livestock,” Don says. “They learn and gain more confidence with each year and a great dog like Freyja who can be a teacher to the next generation – they’re priceless.”

Don’s sheep farm borders the Chequamegon-Nicolet National Forest. Early in April, he found Freyja violently shaking, convulsing and seizing near her sheep yard. He immediately suspected poisoning and rushed her to the local veterinarian. “I’m at a loss to know if it was intentional or if she found something intended for coyotes or something else.” 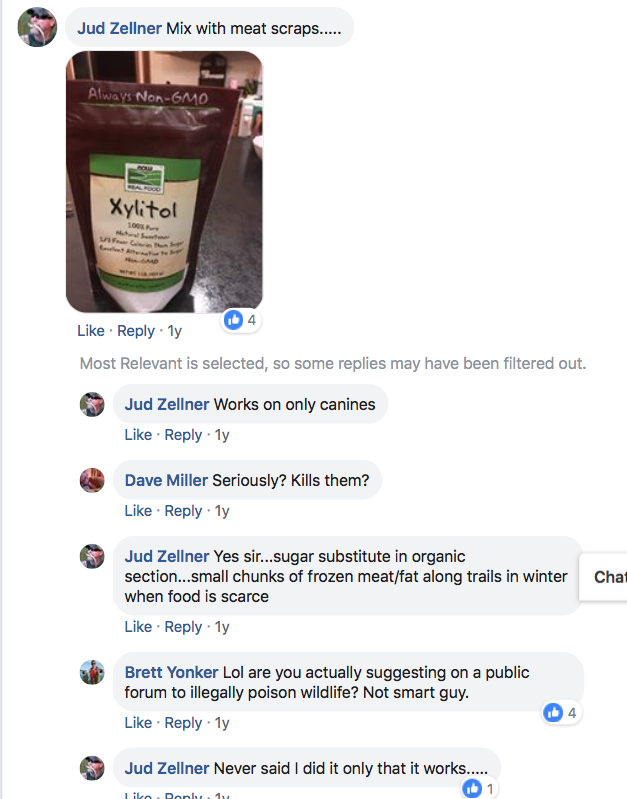 Sadly, the veterinarian did not think to suspect xylitol poisoning, a favorite tactic of bear hounders to reduce wolf presence near their bait stations.

Just last month, a pet owner lost two dogs while walking them along Pine River on Lost Lake Road, where he owns a cabin in the Chequamegon-Nicolet National Forest. Dennis Santini had noticed a frozen mass which appeared to be an animal organ, or part of a carcass. The dogs were curious about it, and he tried to keep them away. But on March 8, after their walk, his 23 month old pup began to seize. He died en route to the clinic, “in the most horrific manner, unfit for any living being.”

Just eight days later, his 14 year old dog died in the same way. Again, the veterinarian was unfamiliar with xylitol poisoning. A poisoned raccoon was found in the same area.

A close friend of Don says his sheep farm is located in an area heavily used by bear hounders. “Also tons of logging going on,” she notes, “so increase in coyote movement in the area along with wolves. Freyja did her job working long nights without incident, although the hounders certainly make their presence known. This is Iron River, unfortunately, Bear Hounding Central. We’ve been more concerned about a confrontation with bear hounds [than wolves] with Freyja defending her flock. But this is just too much.”

Don’s friend used to take care of the farm sometimes when Don had to be away. “Freyja was like our dog. Devastating loss to the operations there. Still gives me a lump in my chest I can’t shake. She was such a phenomenal dog.”

“We are at a loss to know the circumstances, so we’re trying not to jump to conclusions,” Don says of his loss. “There is no measure to the monetary loss. I’m not sure how to calculate that. We know that we do not have, nor use anything here that could cause such a reaction, so it seems it’s from some outside source. We can only speculate given the area that she patrolled, our location and proximity to the National Forest. In any case, the circumstances are highly suspicious given all that goes on around us related to hunting and the hatred of predators.”

Suspecting poison, but unsure of which one, the veterinarian declined to test a sample. However, enough evidence exists to warrant a suspicion of xylitol poisoning in that specific area. In fact, it has been going on for years. Rob Ganson, a hunter and long time resident of Bayfield County who lives near Washburn reported the practice in 2017. “Hounders go out on the forest roads on the peninsula in winter, throwing xylitol-laced meatballs from their truck windows into the snow.” He warns that with snowmelt, the poisons that were set out over winter will now be easily accessed by pets and wildlife, so “keep a close eye on your dogs this spring when hiking in wolf country.”

“We are simply heartbroken. If anyone in our area has knowledge of anyone baiting for coyotes or other like activity…keep close watch on your dogs. I’ll post a video, if anyone cares to see how a dog reacts to poison. Absolutely sickening. RIP our sweet, sweet Freyja.”

Wolf Patrol is offering a $1000 reward for information that leads to the arrest of those responsible for poisoning Freyja or any wildlife illegally in Wisconsin. You can remain anonymous

[Note: All principals in this account requested their names withheld for fear of confrontation with hounders, except Rob Ganson.]