Irresponsible farming, not wolves to blame for dead sheep on Canik farm.

The latest chapter in the curious case of the Canik farm.

Back in May of 2016, 17 Bighorn Sheep breeding ewes were confirmed killed by wolves on a farm near Butternut, Wisconsin owned by Paul and Judy Canik. These ewes were used to breed Bighorn rams that the Canik’s sold for over $5,000 to canned hunting ranches across the US where they are hunted behind fences. This was the first confirmed “surplus killing” of livestock by wolves in Wisconsin. Surplus killing by wolves is a known, but very rare phenomena. Shortly after the 2016 depredations, USDA’s Wildlife Services provided the Canik’s with electric fencing and flagging along the perimeter of their farm.

Fast forward to May 2019, and surplus killing is again in the news affecting the same Canik farm. This time it was 36 Katahdin sheep confirmed killed by wolves – 5 adult ewes and 31 lambs, many of which were never found and presumed taken by wolves. The Canik’s still had the electric fence that was given to them by the USDA, but they had taken it down over the winter and did not reinstall it before putting dozens of vulnerable lambs out to pasture in known wolf territory. The Canik’s also had 7 large Spanish mastiff livestock guard dogs employed to protect the flock, but they were kenneled for the night. 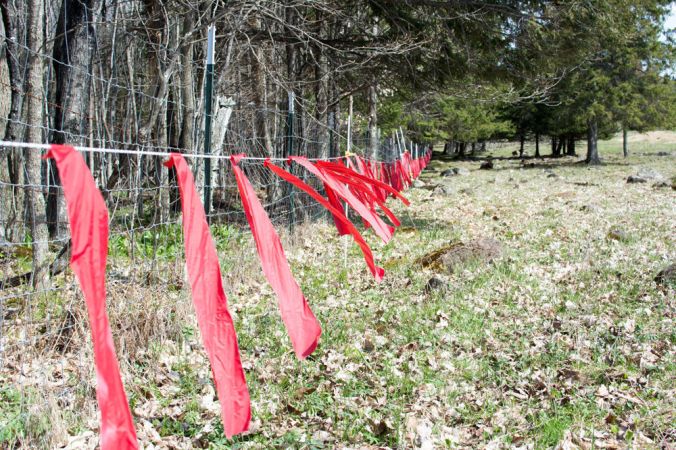 The Fladry provided by USDA…electric fencing was also provided, but not used on the farm.

USDA Wildlife Services Wisconsin supervisor David Ruid stated to reporter’s that sheep and poultry are especially vulnerable to wolf depredation during April and May when hungry pups are in dens and the wolf’s natural prey is limited. Typically only 25-35 farms in the entire state experience issues with livestock depredations attributed to wolves. USDA Wildlife Services is the agency that investigates and determines wolf depredations on livestock. Along with any insurance the farmer may have, they are also compensated by the state of Wisconsin at current market value for any losses caused by federal protected wolves.

Wolf Patrol is not accusing the Canik’s or any other farmers of any wrongdoing, but its undeniable that there are several suspicious factors in the Canik depredations:

– Why did the Canik’s not have their USDA provided electric fencing up during the most risky time of the year?

– Why did the Canik’s have their seven guard dogs kenneled at night, when wolf attacks usually occur?
– After the depredations in 2016, Judy Canik issued the following statement: “I’m very angry because we belong here, our sheep belong here, our guard dogs belong here but the wolves do not belong here.”
– At the same time, Paul Canik said “What I would like to see is if you got a group of wolves like is here, eliminate them.”
– After the last attack, the Canik’s told reporters that the pack that is likely responsible for the depredations has 14 wolves. David Ruid said the pack in the area of the farm – known as the Flood Creek Pack – was counted as 8 individuals this winter.
– When the USDA provided the Canik’s with electric fencing back in 2016, Paul Canik stayed that he was, “far from confident that it will prevent future attacks.” 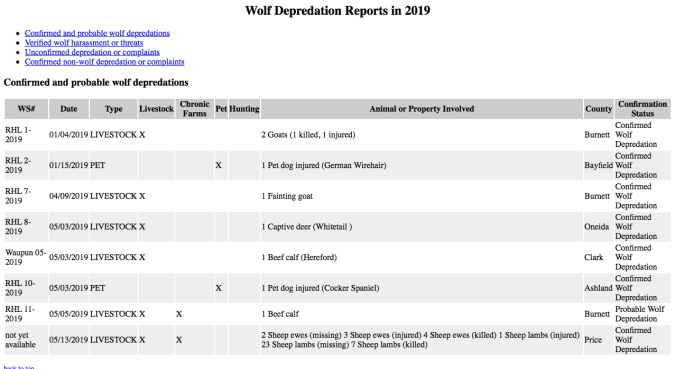 Keep in mind that the Canik farm is the only farm in the state to see such heavy depredations and that they had access to seven large guard dogs and an electric fence provided by the USDA, yet they decided not to employ any of these protective measures during the most dangerous time of the year for these kinds of depredations. Paul Canik also stated that since the latest depredations, the farm has installed a radio at the top of a hill in a pasture to scare wolves away.

Many anti-wolf advocates are currently using the Canik’s latest depredation incident as more evidence that wolves in Wisconsin are out of control and need to lose federal protections. Yet, the majority of responsibility to prevent depredations lies with farmers like the Canik’s who choose to raise livestock in wolf country.

While Wolf Patrol doesn’t deny that wolves are responsible for a statistically insignificant number of livestock losses every year, we do question why a farm with a history of chronic losses refused to employ provided precautions. Until these questions are answered, we hold the Canik’s responsible, not Wisconsin’s wolves for their losses.
Link to news article about 2016 depredations on Canik Farm:
https://www.wjfw.com/storydetails/20160624182940?fbclid=IwAR0pvoq3Sw7APJqvPB_4DhbwC0unlptf0HLXexE0fVMxQGIbUQBucTO-8RI
Let USFWS know your opinion on President Trump’s latest effort to return gray wolves in Wisconsin to state control where they can be hunted with hounds, guns and traps! Send your public comment before July 15, 2019: