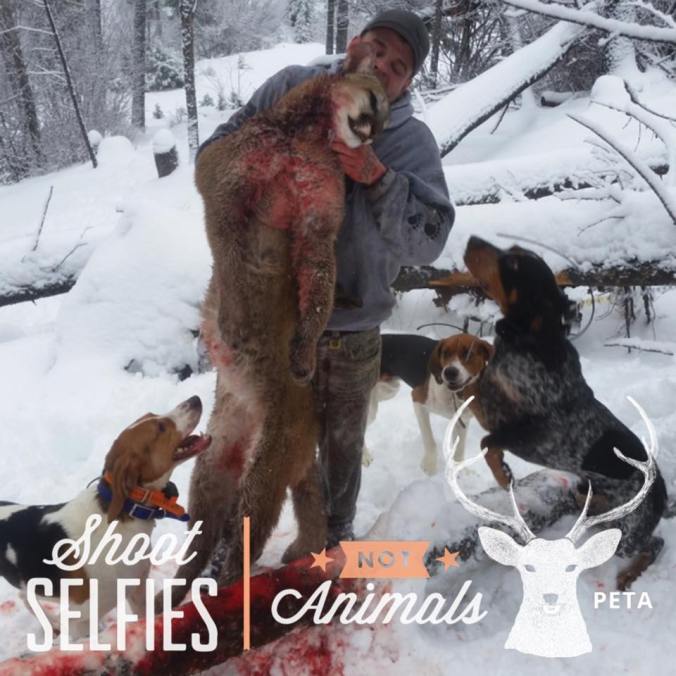 Last month, Wolf Patrol reported on the unethical and cruel behavior of Idaho hound hunter, Roy Ferebee who filmed himself and friends pistol-whipping and punching a mountain lion being mauled by his dogs. The video was shared on a Facebook hound hunting page. We reported these activities to Idaho Fish & Game (IFG) authorities, and asked our supporters to also contact IFG’s Director and ask that Ferebee and his hunting partners be investigated. They were, and unfortunately the IFG investigating officer out of Boise contacted Wolf Patrol on 06/08/19 to inform us that none of Ferebee’s documented acts of cruelty are illegal in Idaho.

The IFG conservation officer investigating the incident said they were familiar with the hound hunting practices of Roy Ferebee and his associates, and told Wolf Patrol that one of the hounders had had his hunting privileges revoked recently for ten years. Unfortunately, they were unable to get a positive identification from Ferebee’s video of any of his associates pictured in the 2016 video. The IFG officer said Ferebee is a “bad apple” who’s punching and pistol-whipping of a mountain lion however unethical, did not constitute and violation of hunting regulations or even animal cruelty statutes in Idaho.

Wolf Patrol was told that many hound hunters have relocated to Idaho, specifically because of the state’s liberal hound hunting and bear baiting practices. Unlike in states like Wisconsin, it is perfectly legal to allow your hunting hounds to maul and fight bears, mountain lions and coyotes. The conservation officer said that there existed a segment of the hound hunting community in Idaho that violated even that state’s liberal hound hunting regulations and whom participated in hunting practices similar to Ferebee’s.

Cruel and unethical hound hunting exists. It is a part of every hunt that involves a prey animal that can no longer escape pursuing hounds and is unable to take refuge. In states like Wisconsin, Michigan, Minnesota, Illinois, Florida, Virginia, Maine, New York, Pennsylvania, North Carolina, Georgia, Iowa and most recently Idaho, Wolf Patrol has uncovered these practices and shared them with both state conservation officers and the public. Where hound hunting bear, coyote and mountain lion is allowed, cruel and unethical treatment of wildlife is happening.

Wolf Patrol’s wildlife crimes investigation unit monitors public and private social media platforms where hound hunters share evidence of their cruelty. When we find it, we report it. If the hunting practices however unethical are legal in a state, we will share that evidence with the public. If an ongoing criminal investigation is begun, Wolf Patrol will not share evidence of suspected criminal behavior.

On a side note, I was able to ask this conservation officer about wolf depredations of bear hounds in Idaho and how it compared to those in Wisconsin. In the early 2000’s before wolves spread to less remote wilderness areas, hound hunters did not experience regular depredations of hunting dogs. Than about ten years ago, there began to be a few incidents each year, when bear or lion hounds would be killed by territorial wolves protecting den sites. This officer said that hound hunters became more cautious and avoided areas with known wolf activity, and that since then in areas of the state where there are no wolves, hound hunters are much more common. Because of the precautions taken by hound hunters in Idaho to avoid active wolf areas, this conservation officer said in the last ten years, he rarely hears of hound depredations by wolves.