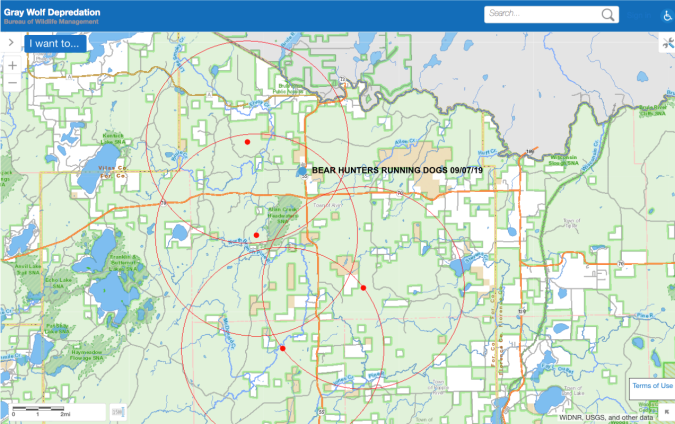 Each red dot is where wolves have killed a bear hound July 2019-Present day. How many more will die before the USFS and WDNR do anything?

These wolves are responding to the lack of any restrictions on bear baiting and hound hunting in their territory, which has been increasing the number of hound deaths reported so far this year, as hunters continue to place their dogs at risk despite continued depredations. In Wisconsin, hound hunters are compensated up to $2,500.00 for dogs killed by wolves.

Could the compensation be an incentive for careless hound hunters? Or do they simply not care that they are increasing the likelihood of even more depredations? Sacrificing bear hounds to wolves won’t win hound hunters an open season on wolves, more than likely it will help Wolf Patrol get them kicked out of our national forests!

If you’d like to help, please email both US Forest Service and WDNR officials asking that the practices of bear baiting and hound training & hunting be restricted or banned outright in the Chequamegon-Nicolet National Forest!

Ty & Wes Belland who shot at wolves killing their bear hound during Wisconsin’s 2019 summer bear hound training season that ended last week. They were cleared of any charges related to violating the Endangered Species Act and are still running their dogs in the same Wolf Caution Area where their hound was killed.