One of two trailers overloaded with dead coyotes at the 2020 Eastern U.S. Predator Calling Championship in Wyethville, Virginia on January 19, 2020.

While states like Vermont and Massachusetts have recently acted to ban coyote killing contests, many states in the Northeast have seen a growth in wildlife killing competitions. Most competition-killers who participate in these contests argue that they are responding to the expansion of coyotes into parts of the country where they never existed before. But the expansion of native predators east of the Mississippi is anything but an invasion. States like New York have seen coyotes and other predators expand into remaining available habitat, left in the wake of eradication of larger apex predators like wolves, mountain lions and lynx.

And while most eastern state’s wildlife agencies recognize the ecological worth of coyotes and know that they are here to stay, many predator hunters are still taking full advantage of the hysteria caused in the media when there is the odd coyote attack on livestock, pets or even people. Responding to fear, not science, many private landowners are allowing more and more predator hunters onto their lands with the aim of total extermination of coyotes and foxes.

Add in thousands of dollars in prize money for the most coyotes and/or foxes killed over one weekend, and you have the 2020 Eastern U.S. Predator Calling Championship (EUSPCC) which this January drew hundreds of hunters from almost every state east of the Mississippi.

One of the 213 teams competing in this year’s Eastern U.S. Predator Calling Championship.

Every one of the 213 teams competing in this year’s EUSPCC contest was desperate to kill as many coyotes and foxes as they could, with not a thought to the ecological impact of their actions. These weren’t hunters chasing predators responsible for recent livestock depredations or attacks on children, these killing contests encourage the killing of every coyote and fox encountered, with no regard for the vital role any of these animals play in a healthy ecosystem.

When I was a child, I read a book called “Don Coyote” about a livestock farmer who realized after eradicating as many predators as he could in the last century, that his actions came back on him ten-fold. Population explosions of rodents that decimated his crops, disease that affected desired game, the wholesale slaughter of predators was realized to be a huge mistake. 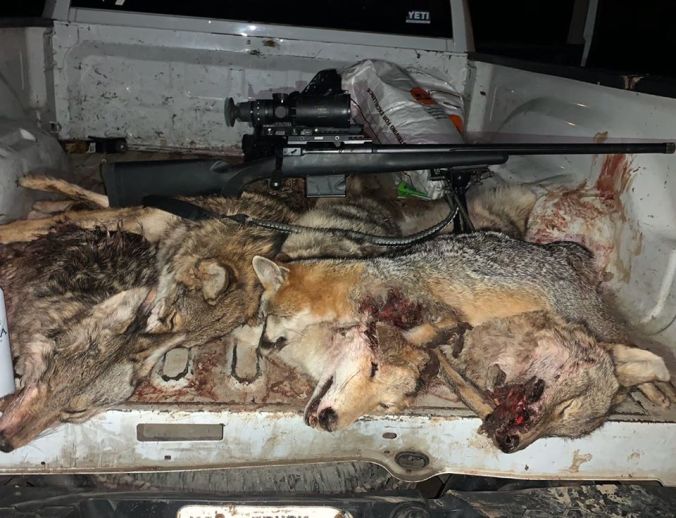 One night’s work during the 2020 EUSPCC.

Now we live in a time when USDA coyote researchers and many other scientist have discovered that coyotes and other predators respond to high mortality by increasing pup production. Rather than removing a predator problem, most predator hunters competing in wildlife killing contests are contributing to the very situation they claim to be against, the growth and expansion of coyotes.

This past weekend saw a gathering of hundreds of predator hunters from multiple eastern states, converging near a truck stop in Wyetheville, Virginia. With trucks laden with the dozens of dead coyotes and foxes each team was able to kill between Friday, January 17-19th, the hunters waited their turn to register their kills at this year’s EUSPCC.

Over $35,000 in cash prizes was awarded to the winners of this year’s killing contest, with firearms, electronic callers, night-vision & thermal imaging gear also handed out to the hunters with the largest, smallest or most animals killed.

I became aware of this particular coyote & fox killing contest while investigating the cruel and unethical predator hunting practices of an individual in my own home state of Michigan. It didn’t take long to realize that predator hunters like George Widmaier and his friends aren’t the kind of people simply trying to put meat on the table, these are men who take pleasure in killing, not to mention the chance of being rewarded prize money for their cruelty and efficiency at predator removal.

George and his friends were ditching out on the many smaller coyote and fox killing contests taking place in their home states of Michigan and Indiana, and headed to the EUSPCC, so I followed and this is what I learned: 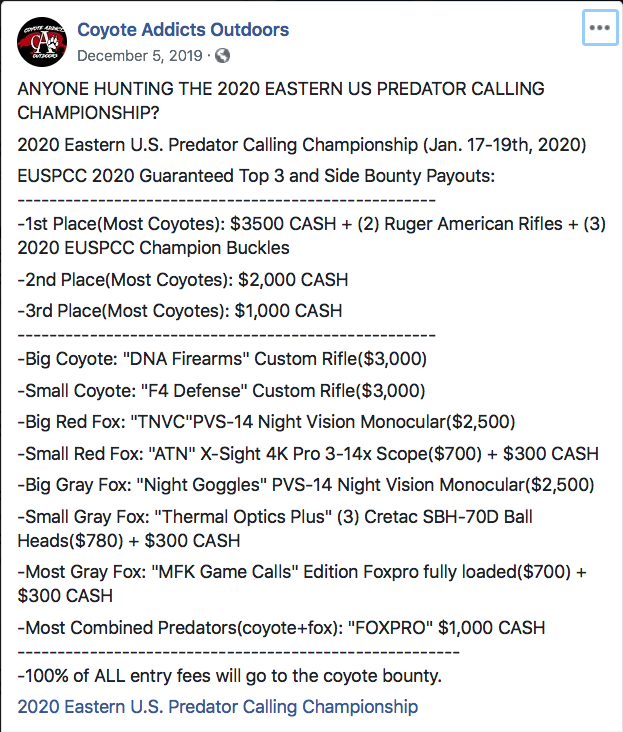 Like most coyote and fox killing contests, the EUSPCC pays out cash for the smallest as well as largest predator taken. This practice encourages the killing of young and cubs, which some of this year’s EUSPCC winners with MFK Game Calls are proudly guilty of doing. 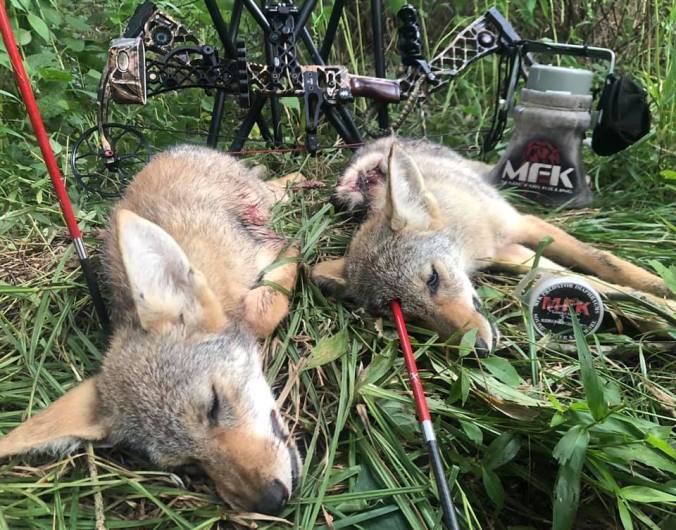 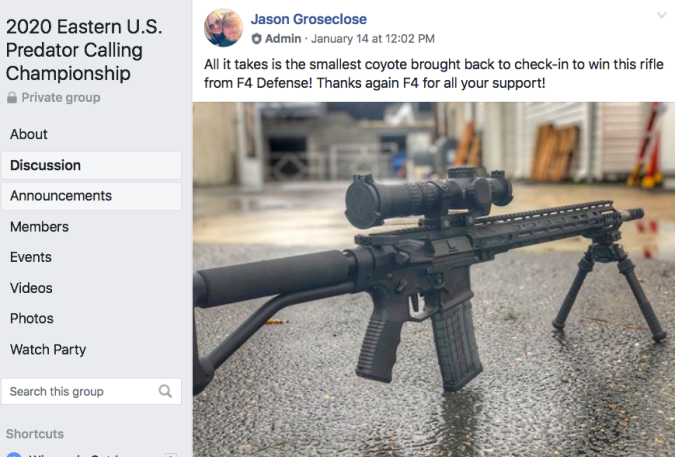 As the EUSPCC killing contest came to an end on Sunday, over 100 trucks laden with dead coyotes and foxes began to line up for the weigh in back in Wyetheville, Virginia. Over 213 teams of mostly three people were registered, while just over a hundred made it to the final weigh-in. 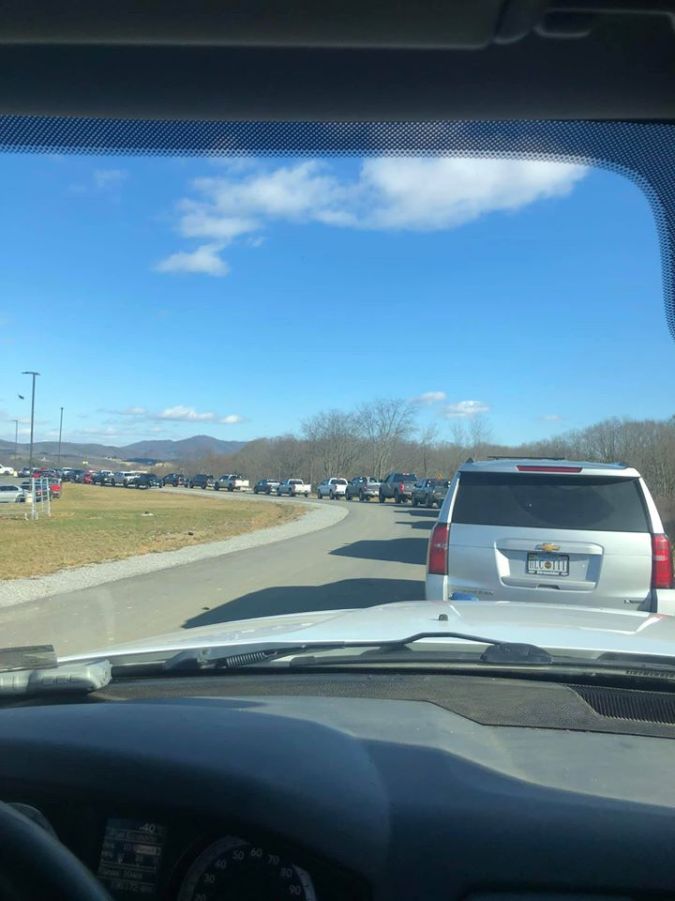 Once inside, contestants weighed their animals, or at least those that were considered eligible for either being the largest or smallest. Many hunters complained that their kills were never weighed, with the organizers responding that in order to weigh every single coyote and fox killed they would have had to stay there the entire night. 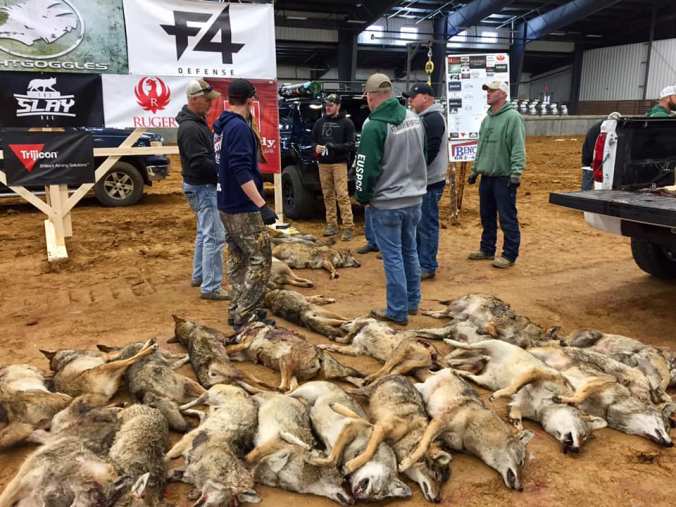 The EUSPCC winners for the most red fox killed in two days east of the Mississippi, went to a team that came in with 82 foxes. They took home $1,000 in cash and a new electronic game caller. 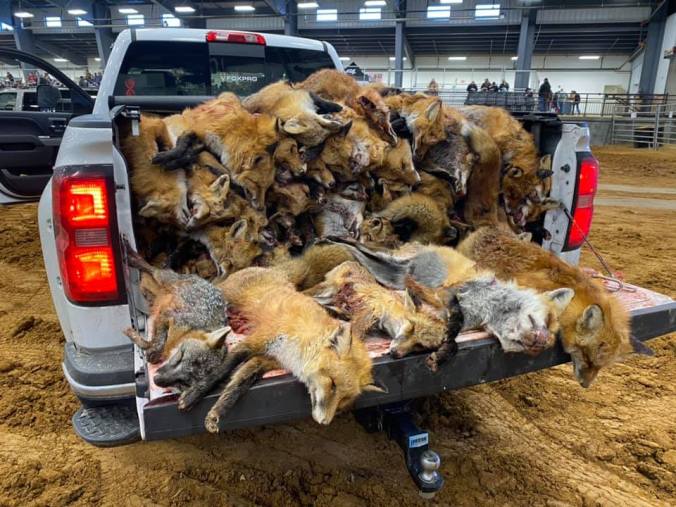 A runner-up for the most red foxes killed during the EUSPCC went to a team bringing in 55 more foxes. Once again, these are hunters out for the highest body count, not after problem animals that are killing livestock or threatening humans in any way. 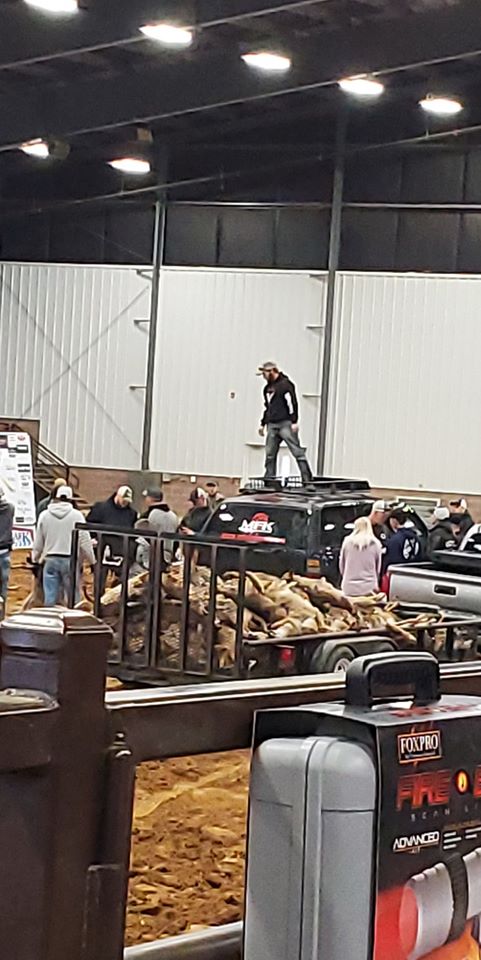 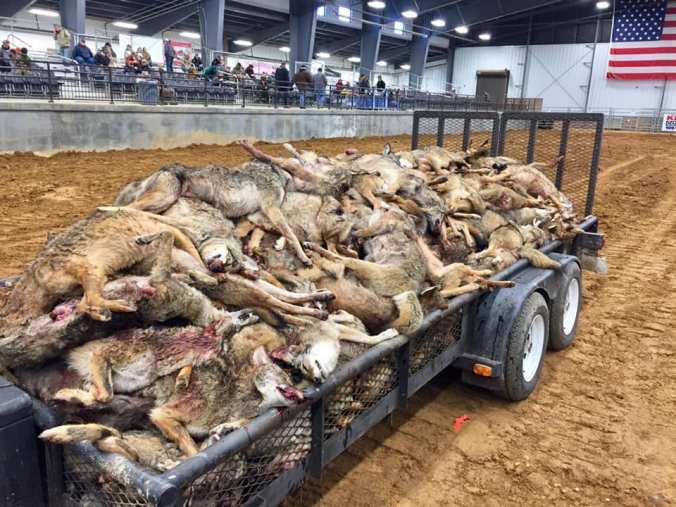 As the EUSPCC came to an end, predator hunters began bragging on Facebook about the one’s that got away. In this Facebook post by the Virginia Sportsmen and Predator Hunters, the contest participant mentions five animals that were shot but never recovered, including one fox that was dragging her intestines as she ran away to die.

The statistics as weigh-in was closing.

Graphic evidence of the cruelty and gore involved and enjoyed by competition-killers during the ESPCC and other killing contest is readily available on Facebook once the money and prizes had been awarded. We are including a video from one of the contestant’s Facebook pages that shows how most predator hunters are able to kill multiple animals in one night: electronic game calls, bait piles, high-powered rifles with thermal imaging scopes and no conscience.

Henry Fur Stackers and participants in the 2020 EUSPCC. If you missed it, don’t worry the organizers have announced that they will be holding another killing competition this coming March. 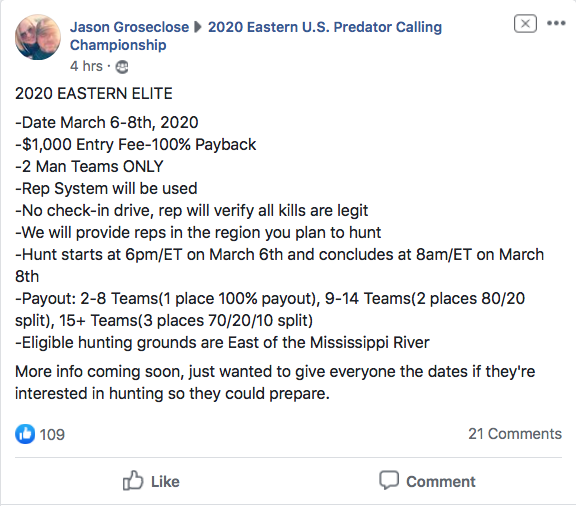 Whether you live in a state that sanctions wildlife killing contests or not, it’s time for all people, including ethical hunters and sportspeople to come out against the wanton waste of wildlife and cruelty associated with coyote, fox and bobcat killing contests. Such wholesale eradication of predators for cash and prizes is anything but science-based wildlife management. 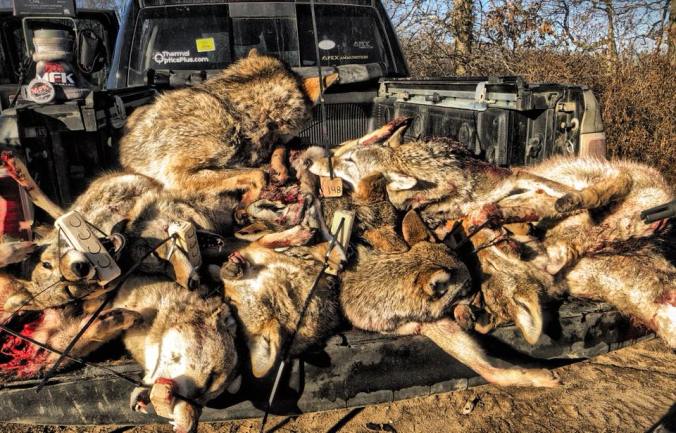 Please join Wolf Patrol in registering your disapproval for wildlife killing contests. Write letters to your local newspaper, boycott businesses that sponsor such events and start attending your home state’s wildlife agency meetings to remind those managing public trust wildlife that killing should never be a contest. 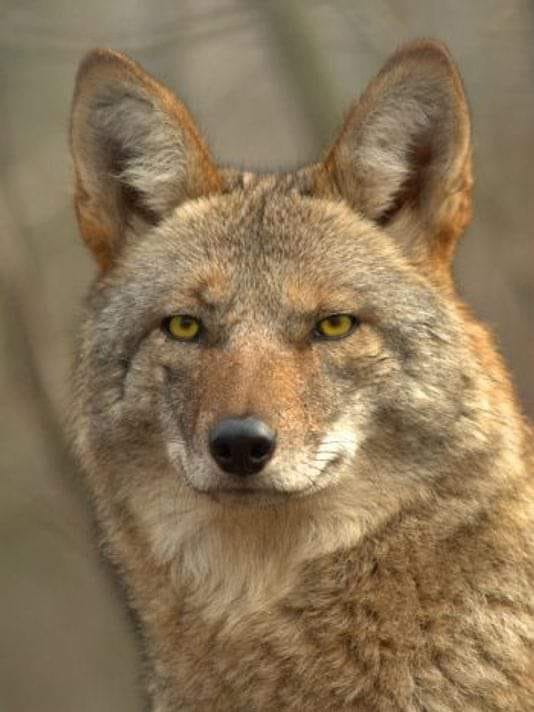 You can help Wolf Patrol continue monitoring wildlife killing contests this winter by making a tax-deductible contribution today! We are a handful of citizens using our own time and vehicles to patrol and monitor coyote killing contests where they occur. Help keep us both in the field and online, reminding this nation’s predator hunters that their actions will not be ignored. For the Coyote, Fox, Bobcat & Wolf Nation, we thank you for visiting our site and spreading the word about these disgusting contests!

Or click on the PayPal link at the top right of the page!