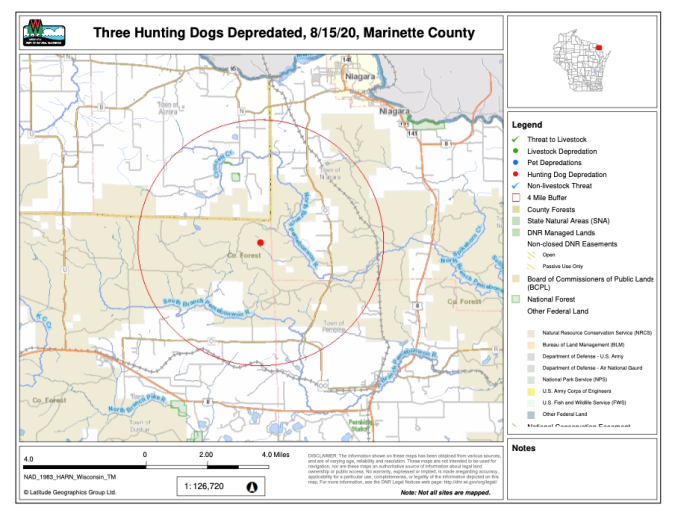 Despite knowing that wolves are becoming habituated to killing bear hunting hounds, the U.S. Forest Service still allows unlimited bear baiting in the Chequamegon-Nicolet National Forest, where many of the depredations have occurred this year.

Wisconsin does not require hunters to obtain any kind of license to bait bears or train hunting hounds, and neither the Wisconsin Department of Natural Resources (WDNR) or the U.S. Forest Service know for certain how many bear bait locations litter our public lands because neither agency requires any limit or even registration on bear baiting, much of which takes place in Wisconsin’s Chequamegon-Nicolet National Forest.

Over 4 million gallons of bear bait is estimated to be used by Wisconsin’s bear hunters, who can begin intentionally feeding bears in mid-April until October. Hound hunters are allowed to chase but not kill bears from July 1st until hunting season begins in October.

Black bear visiting typical bear bait located in the Chequamegon-Nicolet National Forest. Some bear bait ingredients such as chocolate and Xylitol, a sweetener used in peanut butter are toxic to bears, wolves and their cubs and pups.

This year, many bear hunters are reporting gray wolves visiting their bait sites, many in areas where previous depredations on bear hounds have already occurred, such as in Forest County, Wisconsin where wolves killed another bear hound on August 12, 2020. Hound hunters are paid $2,500 for each dog killed by wolves. 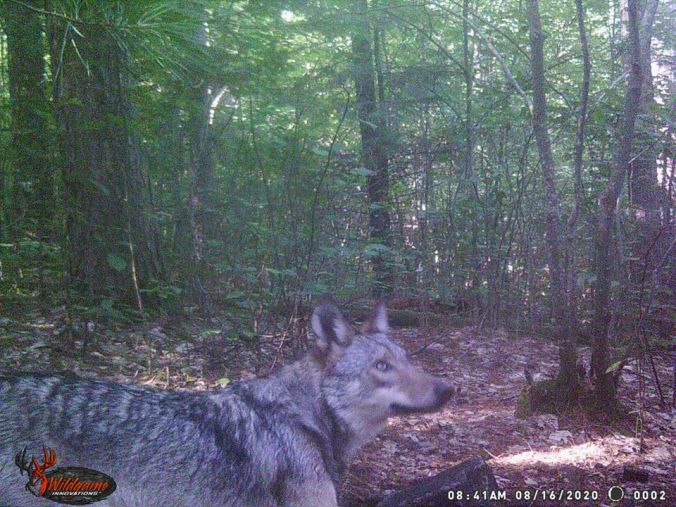 The intentional feeding of bears and other wildlife causes many conflicts for predators that become accustomed to being fed by humans. Last week in Forest County, a bear broke into a bear baiters garage to get at 50 lb. bags of granola and peanut butter being used to bait bears in northern Wisconsin. Some peanut butter contains Xylitol, which is toxic to wolves and other canids. Another common ingredient allowed to be used as bear bait in Wisconsin is chocolate, which is also toxic to bears, wolves and other canids.

August 14, 2020 Facebook post by a bear baiter in Forest County, Wisconsin. Often bears like the one that broke into this garage will be determined to be a “nuisance” and can be killed out of season by bear hunters that created the problem in the first place.

In 2018, a WDNR research study concluded that 40% of a black bear’s diet in Wisconsin’s Chequamegon-Nicolet National Forest consisted of bait set out by hunters. Much of the bait used in Wisconsin is high in sugar and suspected to be causing an abnormal increase in reproduction for wild bears, despite the fact that WDNR says it needs a bear hunt to control the animals growing population.

August 7, 2020 trail camera photo of bears feeding from a bait site in the Chequamegon-Nicolet National Forest. Bear cubs like these are conditioned from a young age into being fed by hunters so there hounds can later chase…and kill them.

And it’s not just bear bait that is causing problems for wildlife in our national forests, since 2018, someone has been poisoning wolves and other animals in what is suspected to be retaliation for bear hounds killed by wolves in Wisconsin. Numerous witnesses have stated that bear hunters are responsible for the poisonings, but to date there have been no arrests. Wolf Patrol continues to offer a $5,000 reward for information on the poisoning in Wisconsin’s Chequamegon-Nicolet National Forest.

Please join Wolf Patrol in calling for an end to bear baiting and summer hound training in the Chequamegon-Nicolet National Forest. You can send your email to forest officials at:

You can also help support Wolf Patrol by purchasing an “END BEAR BAITING IN OUR NATIONAL FORESTS” t-shirt which is only available for five more days during our special promotion. Please visit the following link to order your shirt today!

Wisconsin bear being bayed by hounds belonging to Stephen Counard.