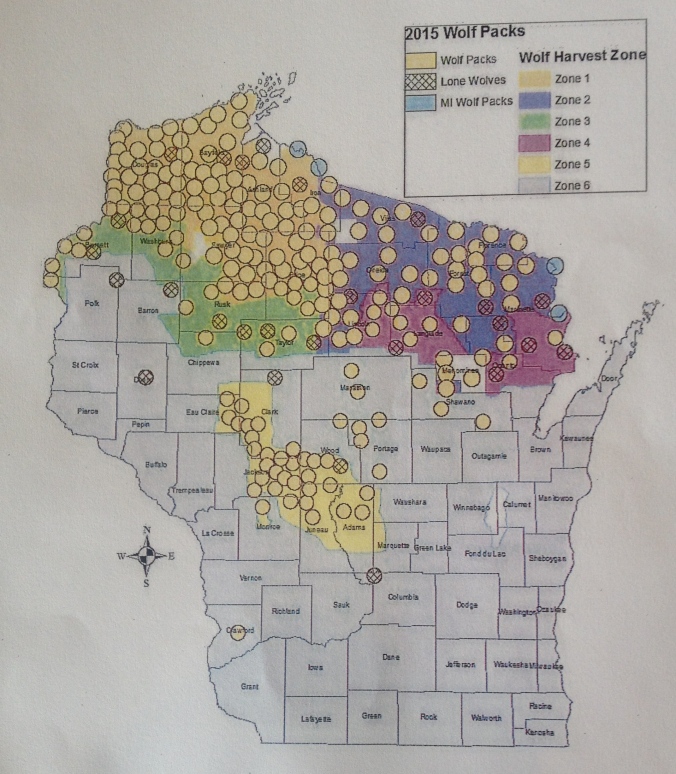 Last week, Wolf Patrol attended Wisconsin’s Department of Natural Resources (WDNR) public meeting on the state’s wolf population. Each winter, over the last two decades, WDNR & citizen trackers have surveyed the state to keep track of Wisconsin’s wolves numbers. Before being returned to federal protection in December 2014, there were three public wolf hunting seasons in Wisconsin. In 2012, 119 wolves were killed by sport hunters and trappers, and in 2013, over 250 wolves were killed by hunters including 29 with the aid of hunting hounds. The 2014 survey registered a 19% decrease in overall wolf numbers, and last year the hunting quota was reduced to 150 animals, with four more killed by hunters, trappers and houndsmen. 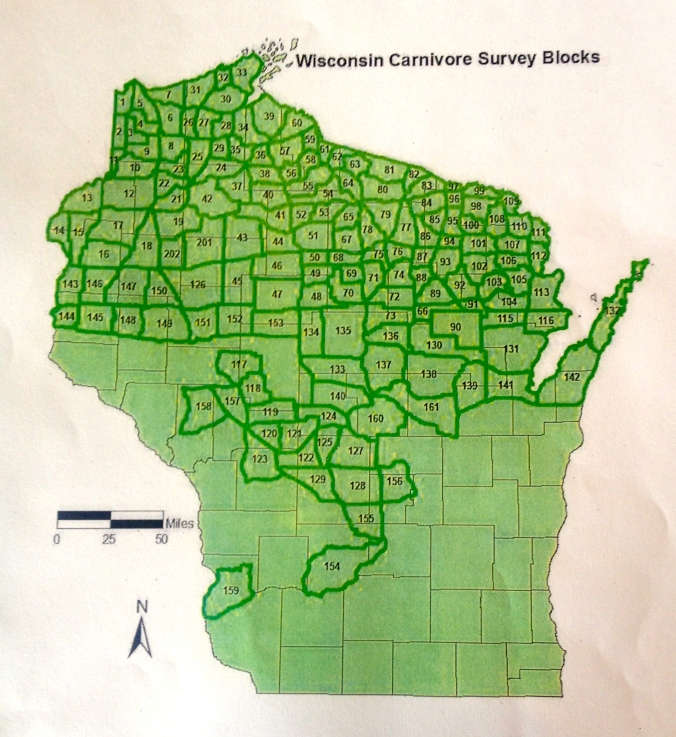 Areas where wolves are tracked…

This year’s meeting came with three items that conservationists should be happy about, first, that despite three years of sport hunting, gray wolves have continued to expand into suitable habitat, now numbering an estimated 746 animals (keeping in mind that much of the state borders Minnesota where another estimated 2,000 wolves live and disperse). Secondly, last year saw the lowest incidents of livestock depredations attributed to wolves and WDNR officials were on hand to credit (at least partially) an increase in the use of better nonlethal control methods which have been increasingly used more effectively in Wisconsin. 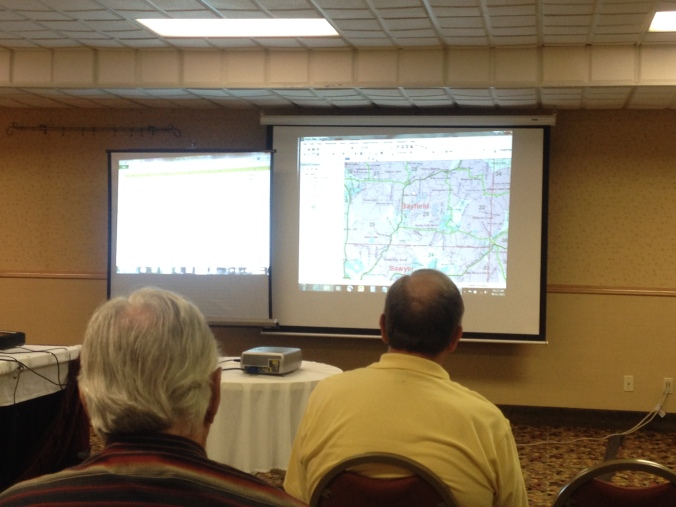 Reviewing the data from the wolf census…

The third item announced by WDNR last week, was that despite ongoing efforts by WDNR and other states to regain legal control of gray wolves following the December 2015 re-listing decision, it has been decided that there will not be a 2015 wolf hunting season. While it might seem a given that there would not be a hunt after wolves were so recently returned to endangered species protections, conservationists shouldn’t expect wolf hunts to be a thing of the past in lieu of numerous legal attempts to circumvent the Endangered Species Act by state and federal politicians, all with the support of state wildlife agencies. 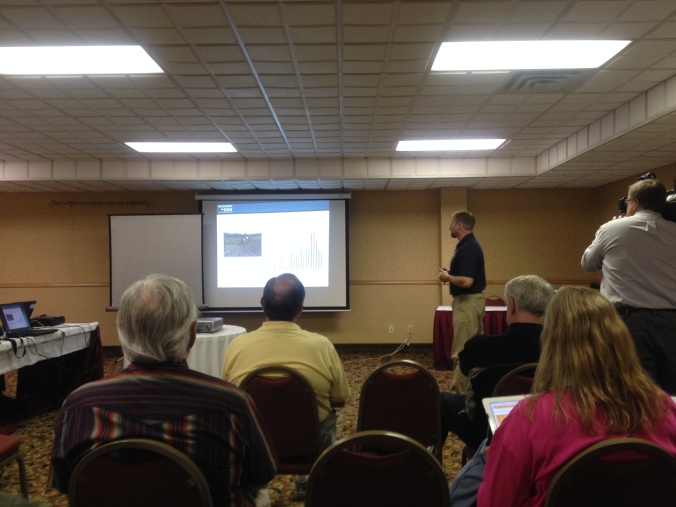 Looking more closely at the actual numbers from last winter’s survey, it was interesting to see that in some areas where multiple wolves were killed by sport hunters and trappers, pack size declined, and in some cases completely vanished. Unfortunately, Dave McFarland, WNDR’s Large Carnivore Biologist, said at last week’s meeting that researchers haven’t analyzed data to evaluate whether hunting harvests were having an adverse affect on individual pack sizes or locations. With gray wolves having only been recently returned to the landscape, and so little known about their renewed relationship to the changed environment, its anyone’s guess which way things could go for Wisconsin’s wolves if the state returns to a recreational wolf hunt. We at Wolf Patrol do not pretend to be biologists, but we read everything we can about wolves that’s currently being written, all so that we might better serve as active and informed citizens in each state where wildlife agencies want to hunt them. So when we see an apex predator like the wolf coexisting within a human environment with low depredation of livestock and an expected impact on prey animals such as deer, we believe its scientifically unnecessary to sanction future wolf hunting or trapping, and instead increase emphasis on practices that are scientifically proven to reduce wolf/human/livestock conflicts. But it’s not as simple as asking WDNR to stop wolf hunting. The state legislature established the wolf hunt, so it has to be citizen political action that will stop it. Wolf advocates in the Great Lakes need to get behind the idea of a citizen referendum to repeal the hunting of wolves in Wisconsin, all while keeping a watchful eye on anti-wolf legislatures who are fighting to keep the wolf hunt alive. Also, wolf advocates need to support WDNR’s increased use of non-lethal control measures and work directly with livestock producers to promote their application. What’s encouraging about the future of wolves in Wisconsin, is that WDNR officials recognize that there is a changing attitude occurring right now about wolves and wildlife management, and there’s a greater need for citizens to get involved with the WDNR’s public process to better reflect that change. Some states seem galvanized in their attempts to prioritize big game hunting over non-consumptive activities such as wolf-watching, but in Wisconsin, people are coexisting with wolves and public participation still plays a large role in WDNR policies. Wolf Patrol has proven that citizen’s have a role in monitoring wildlife policies and by monitoring other legal hunting activities, we can help ensure that other harmful practices such as legal snaring, trapping and hound hunting of coyote do not inadvertently lead to wolf deaths. So while state and federal officials fight over legal control of wolves and future hunts, we can still play an active role in influencing policies WDNR does have control over AND that adversely affect wolves. Enter the issue of hound hunting and how 2014 saw more hunting hounds killed by wolves than in any other year. Was this a result of an increase in wolf dispersal? No. Was it the result of an increase in hound hunting? Yes.

Wisconsin offers more recreational hound hunting opportunities than any other state in the midwest, not only for wolves as was mandated by the state legislature, but primarily for black bear with an additional growing number of hound hunters pursuing raccoon, fox, bobcat and coyote. State law even allows hound hunters to use captured fox, coyote and raccoons to train their dogs. But when it comes to training bear hounds, hunters can legally chase black bear beginning in July which is also when wolves and their spring pups are most active and territorial. So dozens of hunting dogs are killed every summer by wolves in Wisconsin. Hound hunters in Wisconsin are not held responsible for such attacks on their dogs, instead Wisconsin residents who buy endangered species license plates unknowingly compensate hound hunters $2,500 for every dog they lose while chasing wildlife on public lands. https://youtu.be/YZdqT_R31ec The summer of 2015, might surpass last year in the number of hound deaths, while individual pack sizes are smaller, their distribution is growing, all while hound hunters are commonly dependent on technology that allows them to have the edge over any wild animal. Literally every hound hunter Wolf Patrol has documented in Wisconsin, operates with other vehicles, all equipped with 4-wheel drive, CB radios, cellphones and GPS tracking equipment on their dogs. I asked Dave McFarland if WDNR had ever considered closing hound hunting in areas where recent wolf activity was reported and he replied that WDNR could issue alerts, but could not close hunting in any part of the state without a legislative act. Wolf Patrol will continue to advocate for a reform of hound hunting practices in Wisconsin, especially as it pertains to coyote, which can be hunted with hounds without a season or quota even at night. Many hound hunters on Facebook openly brag about misidentifying wolves as “large coyotes” and a local resident told us recently that they have called the WDNR no less than 50 times on a self-identified coyote hound hunter that they have witnessed poaching. Beginning this Summer, Wolf Patrol will also be monitoring the bear hound training season while also patrolling for illegal hunting activity especially in areas with newly reported wolf packs. We will also be patrolling during coyote trapping season. While wolf trapping is illegal in Wisconsin, setting identical traps to those used for wolves, in wolf habitat, but for coyotes, is not. According to McFarland, 8 wolves were accidentally trapped in legal traps set for other wildlife, and these were fitted with radio collars and released. When asked if any wolves had inadvertently been killed in a coyote or bobcat snare or trap, he said none had been reported. Wolf Patrol will also continue to work with Wisconsin’s Department of Natural Resources and aid in the effort to continually monitor wolf expansion and combat poaching. We would especially like to thank Large Carnivore Biologist, Dave McFarland and other WDNR staff for facilitating the WDNR wolf population meeting and providing the information that went into this article. Please help support Wolf Patrol’s 2015 Wisconsin Wolf Campaign by donating your time, skills or resources. We are a non-profit campaign serving to protect and preserve wolves through education, documentation and citizen activism.

3 thoughts on “WISCONSIN WOLF UPDATE: Wolf Numbers Up, Livestock Depredations Down, No Hunt this Fall”