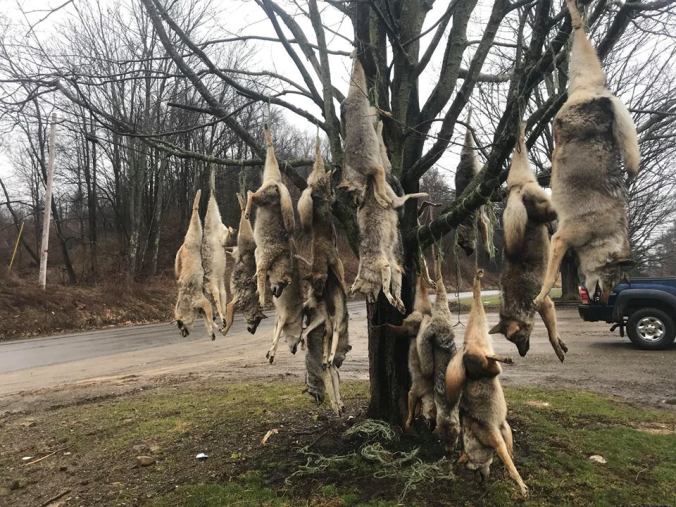 A Pennsylvania hound hunter’s tradition, published on Facebook in April 2018.

This April marked the end of another coyote hunting season with hounds in Wisconsin and in other states like Pennsylvania, where there is no closed season or bag limit for coyotes. The use of hounds to hunt coyotes has become a cruel and abusive sport in most of the midwestern and eastern states where multiple hound trucks with GPS collared dogs run down coyotes. A search on YouTube or Facebook will easily lead you to public graphic videos of hunting hounds tearing into exhausted coyotes. No where else has this kind of hunting been more graphically represented on social media than in Wisconsin, Michigan and this winter, in Pennsylvania.

A Pennsylvania coyote moments before being mauled and killed by hounds in January 2018.

The following is some of the evidence Wolf Patrol uncovered on social media of the wanton waste and abuse that is a part of all coyote hunting with hounds, in every state where it is allowed. And although the videos in this post were filmed in Pennsylvania, every coyote hound hunter knows this kind of hounding activity happens in Wisconsin, Michigan, Minnesota and other states as well.


Hunting coyotes with hounds is a sport many hound hunters participate in during the winter months when hunting seasons for bear and other animals are closed. But unlike black bears who can climb trees to avoid physical attack by packs of pursuing hunting dogs, coyotes are often cornered, captured and mauled. Some hound hunters will even wound an exhausted coyote and allow hounds to tear into the animal, some of these dogs become better “killdogs” while others are best at simply following their prey’s trail.

In many states like Pennsylvania and Illinois, it is legal for hunting dogs to kill prey, but in Wisconsin it is not legal for dogs to maul, attack or kill coyotes or other wildlife as is depicted in these and dozens of other videos Wolf Patrol has found on hound hunter’s own Facebook pages.


In January 2018, while investigating coyote hound hunters in the Chequamegon-Nicolet National Forest of northern Wisconsin, members of Wolf Patrol were surrounded and detained by a large coyote hunting party unhappy with their hound hunting being documented by Wolf Patrol. While investigating members of the hunting party, we discovered that some were allowing their dogs to illegally kill coyotes with their dogs. Following the January incident, Wolf Patrol continued investigating suspected hound hunting abuses and publishing the evidence we discovered on of illegal hunting activities in Wisconsin and other states.
In March 2018, the Wisconsin Department of Natural Resources’ (WDNR) Regional Warden Supervisor for northern Wisconsin contacted Wolf Patrol to inform us that a criminal investigation was being launched into the illegal hound hunting activities published by Wisconsin hunters on social media. Later that month, WDNR Chief Warden Todd Schaller called Wolf Patrol to update us on their investigation into the abuses we were exposing and tell us of criminal charges being brought against Wisconsin hunter Jason Armbruster, whose photos of his dogs attacking raccoons had been reported to WDNR previous to being publicized by Wolf Patrol.
Unfortunately, the painful injuries inflicted on coyotes and other wildlife by hunting dogs is encouraged, rewarded, and applauded by “houndsmen.”  In a sport that trains packs of dogs to run together, chase after, fight, and draw blood, this is an inevitable outcome. Not only do coyotes suffer, but often the hounds themselves are severely injured by bears and coyotes and sometimes outright killed in an attempt to please their owners. In states such as Wisconsin, wolves which are encountered by packs of barking hunting hounds will often turn the tables and get the best of the hounds they are trying to outrun or in an attempt to protect their territories and families.

Resident and non-resident hound hunters who have hunting hounds killed by wolves in the state of Wisconsin are routinely compensated up to $2,500 for their careless loss, with most of the money coming out of the state’s Endangered Species Fund. 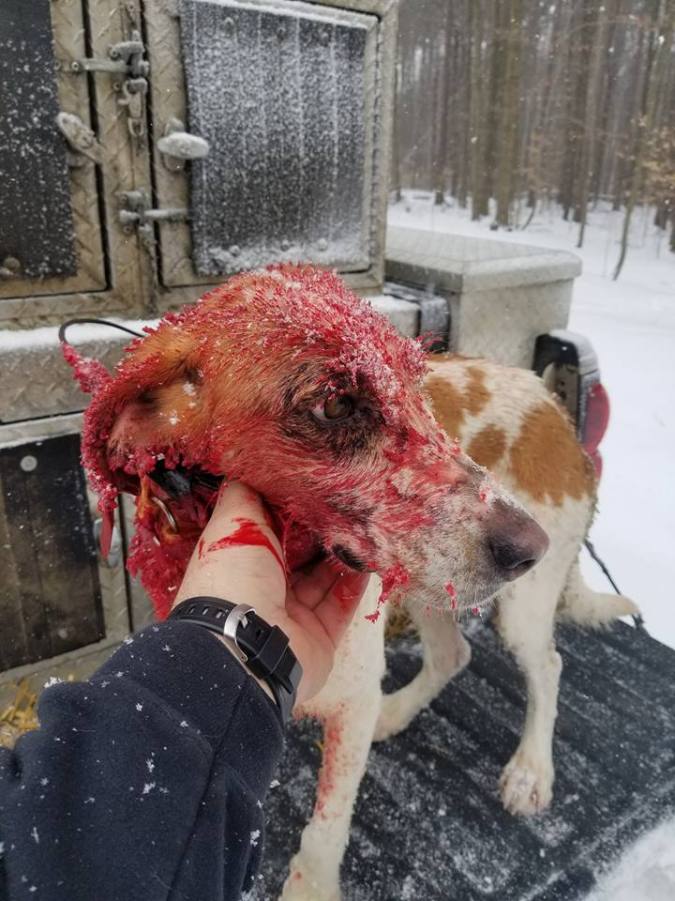 States like Pennsylvania, New York, Iowa, Illinois, Oklahoma and Arkansas know of the inherent cruelty involved in hunting coyotes, raccoons and fox with hounds, so its legal in those states to allow hunting dogs to fight with coyotes every winter, when there’s nothing else to legally kill. Hunting hounds tearing into coyotes in Wisconsin is a crime that Wolf Patrol will continue to investigate and report.

In April 2018, Wolf Patrol’s Wildlife Crimes Unit announced the launch of a new reward program that offers to pay $1000 for evidence of illegal hound hunting activities in Wisconsin that led to any conviction. The program is meant to encourage ethical hunters to report others they know of who allow their hounds to illegally kill coyotes or other wildlife. Your identity will be protected, and if your tip leads to a conviction, you will receive $1000, no questions asked.

This one group of coyote hound hunters in Pennsylvania were responsible for killing 114 coyotes during winter 2017-18. Here they celebrate their 100th.

Wolf Patrol is pleased to know that WDNR conservation officers are investigating illegal hound hunting activities in Wisconsin, but much more needs to be done. While hounders like Armbruster have been charged, according to Chief Warden Schaller, others whose illegal activities we highlighted, were only contacted and given warnings, as most of the evidence against other hounders was too old to act on. Still, Wolf Patrol appreciates WDNR wardens reminding hound hunters that it is illegal to allow your dogs to maul or kill coyotes and other wildlife.

One of the Wisconsin hound hunters encountered by Wolf Patrol in January 2018, broadcasting her illegal animal cruelty to friends on Facebook.

In May 2018, Wolf Patrol members investigated a large pile of coyote carcasses dumped in the Ashland County portion of the Chequamegon-Nicolet National Forest. The pile was not unlike many others discovered when snows melt each Spring, revealing the carnage left behind by hound hunters who only want to kill, but not make use of any part of the animal. Over 30 coyote carcasses were found, many with shotgun wounds consistent with hound hunters, not trappers or predator callers.

WDNR & USFS investigated the dumping on national forest lands, but indicate that although unethical, it is legal to kill an unlimited number of coyotes, and later dump the bodies in a legal fashion. Investigators told Wolf Patrol that at the most, its a case of illegal dumping, because the carcasses weren’t spread out in a way that they could decompose more easily. Mange has been reported in many coyotes in the area, so investigators surmise that might explain why the coyotes were not skinned in this particular carcass pile.

Because both WDNR & USFS investigators have indicated that they would still like to know who is responsible for the coyote dumping which they say was first reported months ago, Wolf Patrol is offering a $500 REWARD for information that leads WDNR and/or USFS investigators to whoever dumped the coyotes on US Forest Service lands.

Wisconsin state law prohibits the wanton waste of wildlife, but the law is broadly defined, and it must be proven in court, that the intent of an activity was actually to destroy or waste wildlife or any other state natural resource. Still, according to a WDNR conservation officer interviewed about Wisconsin’s wanton waste laws on the hunting site, HuntTheNorth.com:

“…those who are just to lazy to clean their game and allow there harvest to go bad, or those who had no intention of eating or utilizing the game they harvested in the first place, those people have no business participating in the outdoor traditions many of us have grown to cherish so much. We as hunters and fisherman have a moral obligation to make sure that the game we harvest goes to good use and to make sure that it does not end up in a dumpster somewhere rotting away.”

Wanton Waste Laws- What Do They Mean and Why Do They Exist?
An Interview with a Wisconsin DNR warden by a pro-hunting organization: