Wisconsin DNR Chief Warden Todd Schaller recently told WXPR News in northern Wisconsin that wildlife killing contests like the planned KB Memorial Predator Hunt in Oconto County next week, are perfectly legal in the state of Wisconsin. The radio interview was in response to Wolf Patrol and other wildlife organization’s opposition to contests where prizes are awarded for the largest and smallest coyote, as well as the number of animals killed during the contests. 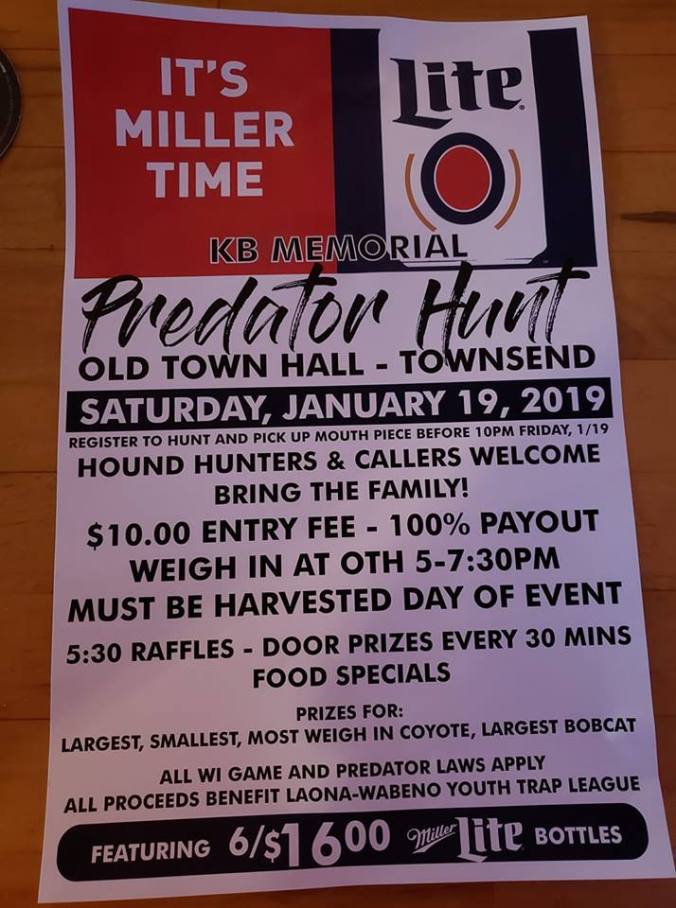 WXPR reported that the Oconto County hunt was billed by the organizers as “Wisconsin’s biggest coyote hunting tournament” which is saying something for a state that hosts dozens of killing contests every winter. The KB Memorial Predator Hunt is scheduled to take place on Saturday, January 19th and participants will be hunting with hounds in the surrounding Chequamegon-Nicolet National Forest and other public lands open to hunting.

Wolf Patrol’s opposition to the hunt is based on past events such as in January 2016, when illegal baits were discovered in use on national forest lands during a Argonne, Wisconsin predator killing contest. Since then, illegally killed wolves have been discovered just over the border with Michigan, and in 2018 there where five separate violent conflicts (fights) between hunting dogs chasing bears, coyotes and bobcats and gray wolves in the the planned contest area.

Chequamegon-Nicolet National Forest (CNNF) officials have also stated to Wolf Patrol members that they do not require a special permit for wildlife killing contests on national forest lands, despite the fact that they have no knowledge of how many hunters will be participating, or that cash prizes are being offered for the largest coyote killed in federally protected gray wolf habitat in the CNNF. 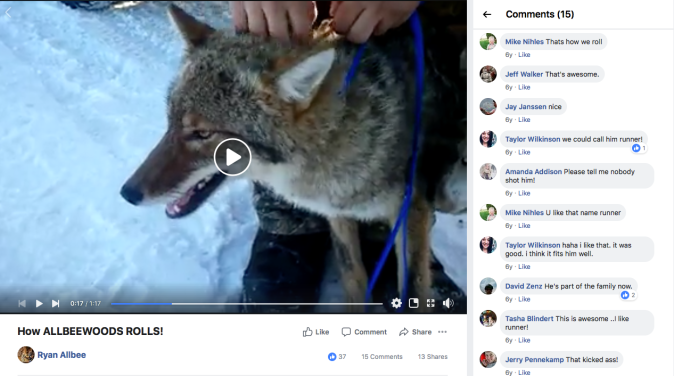 Wolf Patrol is also opposed to coyote killing contests because of the wanton waste and cruelty that has been discovered in recent years being committed by hound hunters in Wisconsin. Last Winter, Wolf Patrol published dozens of videos from hound hunters posted on Facebook revealing hunting hounds mauling, fighting and killing coyotes and other wildlife in Wisconsin. The videos resulted in a DNR criminal investigation, but to date only one hound hunter has been criminally charged.

The video accompanying this article was compiled from the Facebook pages of two Wisconsin hound hunters, Eddie Snyder and Ryan Allbee. Although the videos were made between 2012-17, recent evidence shows Allbee’s hounds attacking a cornered coyote and Snyder is currently organizing a coyote killing contest for mid-February in southern Wisconsin. These individuals are not “bad apples” they accurately represent the kind of cruelty that has become inherent in hunting coyotes with hounds all over the midwest and other states with no closed season or bag limit on coyotes.

Chasing and catching, then chasing coyote again in Wisconsin.

Wolf Patrol is calling on the Wisconsin Department of Natural Resources to prohibit Eddie Snyder from organizing any wildlife killing contests. We believe evidence available on his own Facebook account demonstrates criminal animal cruelty, and hunting methods contrary to DNR hunting regulations.

SEND YOUR EMAIL OR LETTER TO WISCONSIN NATURAL RESOURCES BOARD (All members):

SEND YOUR EMAIL OR LETTER TO CHEQUAMEGON-NICOLET NATIONAL FOREST OFFICIALS: